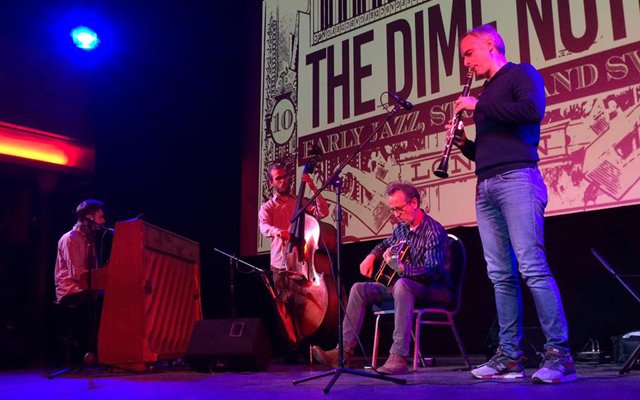 From the earliest days one of the most iconic images of Jazz performances has been the glorious and creative frenzy and magnetic athleticism of its musicians – from New Orleans and Chicago, Kansas City and New York… and way across the proverbial pond, to Europe where it lives and breathes today. The visual counterpart to all of the sound that grew – and continues to grow – out of the component instruments, joined in a joyous brotherhood [and sometimes sisterhood] has been the music’s energy. Musicians such as Jon Batiste and Emmet Cohen are the epitomai of this phenomenon, as is a brotherhood formed not long ago in England; a brotherhood called The Dime Notes. 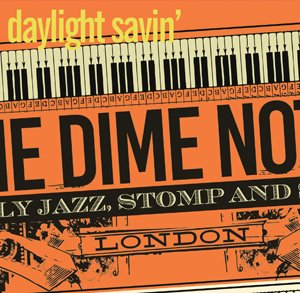 The collective comprising pianist Andrew Oliver, clarinetist David Horniblow, guitarist Dave Kelbie [likely the proverbial catalyst in the group] and contrabassist Louis Thomas [sometimes also Tom Wheatley] make up the Dime Notes. Together these men are the byword for commitment to this music and with their relentless swing and mastery of changes they are the beacons of commitment that honours pioneers such as Jelly Roll Morton, James P. Johnson and – by way of Duke Ellington – Jimmie Noone and others. This they do with uncommon passion and virtuoso skill on Daylight Savin’, the second album under the banner of The Dime Notes [ although Mr Oliver and Mr Horniblow also released a classic recording The Complete Morton Project on Lejazzetal in 2019].

This music is served up in a delightfully hyper-driven cocktail of Mr Oliver’s elegant stride piano, swirling waves of woody melodies played by Mr Horniblow, both egged on by the ever present propulsion of Mr Kelbie’s guitar and Thomas’s contrabass. All of this is – as ever – executed with the kind of no-holds-barred conviction and musical sensibility that is second to none. Charts that it would do good to remember include Jimmie Noone’s “El Rado Scuffle”, Jelly Roll’s “Fickle Fay Creep” [which features a rare unveiling of the incomparable Mr Kelbie’s dynamic skills] and “Why”. Early Duke Ellington is honoured with “Jubilee Stomp” as is James P. Johnson, with “Worried & Lonesome Blues”.

To keep the flame alive, Mr Oliver has also penned – and delivers – what could also be the group’s signature tune appropriately entitled “Ten Cent Rhythm”. Together this repertoire makes seductive listening. This impeccably recorded repertoire is by turns playful, elegant and ingenious, executed with legendary colour and warmth, rich in tone, passion and expression played by musicians who parlay with the familiarity of old friends basking in each other’s virtuosity and, of course, the joie de vivre of la musique du jazz hot… which is yet another set from The Dime Notes to die for.