After storming the heights of the avant-garde and blazing a trail of his own Sun Ra left his Arkestra for his planetary voyage of no return. The Arkestra was left in the capable hands of his rock, Marshall Allen to carry out its mission to go where most musicians will never go making new incursions into the musical infinity. Still performing and touring the Sun Ra Arkestra has made several trips to the studio recording album after album, each a voyage of discovery all its own. More than that Marshall Allen has mustered the troops leading them on many a world tour. One of these groundbreaking tours took them to Turkey in 2014. This was to be the third excursion to Istanbul at the behest of Mehmet and Ahmet Ulŭg, two ‘cultural activists, and Sun Ra enthusiasts’, as Knoel Scott, Arkestra visionary and alto saxophonist, and vocalist of the band put it. The 2014 concert was not only captured on the equivalent of more than hour-long audio tape, but was also captured in all of its glory on film by a talented Turkish film crew led by Director Esra Ocak. The results of both make up this priceless package. 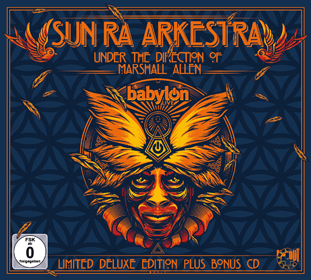 The package entitled Babylon is available as a deluxe, super-pack and includes a CD and DVD of the performance recorded at the Babylon Club in May 21st 2014 in Istanbul, Turkey. Once again it shows that Marshall Allen, now in his 91st year to be at the height of his powers, both as a saxophonist and leader of one of the most iconic jazz bands of all time. The Arkestra itself is the possessor and purveyor of massive and all-engulfing energy which seems to come from the spirit of Sun Ra, himself. Him and Marshall Allen. The latter this time supports the legacy of Sun Ra with warmth and poetic commitment. His leadership and companionship for such opulent pieces as Astro Black, Saturn, Stardust and Satellites Are Spinning – legacy favourites are sure to raise a few eyebrows. And certainly few performances could show such musical engagement, making even old music spring vividly to life.

The DVD helps bring the performance to life in a more visceral manner. Costumes shimmer and sashay with their wearers as the band gets deep into the soul of the music. The music itself seems to burst out of the speakers and the screen and the cameras are so caressing and real that you feel you could almost reach out and touch the players themselves. The direction is gloriously sympathetic to the musicians and to the composer’s and players’ towering rhetoric. Again, the pieces – including three new ones that are not on the CD – show this incarnation of the Arkestra playing with unfaltering command that it allows for the finest expressive power. Fingerwork and the even strength of the compositions’ octaves are things to marvel at but what makes the playing so special is the seriousness of the approach. Hear them in Satellites Are Spinning and especially in the valedictory close, or in the steady rather than frantic figures and you may well wonder when you last heard a performance so full of explosive energy as well as one so dignified and poetic.

Finely recorded and filmed, this is a record for everyone’s delectation and I can scarcely wait to hear the Sun Ra Arkestra under the direction of Marshall Allen live again in other works from Sun Ra’s already formidable repertoire.

In the Egyptian section of the Penn Museum stands a man. He is next to a 12-ton sphinx and is wearing a multi-colored dream-coat. His beret shimmers; a red cape hangs about his shoulders. “Planet Earth can’t even be sufficient without the rain, it doesn’t produce rain, you know,” he tells the camera. “Sunshine…it doesn’t produce the sun. The wind, it doesn’t produce the wind. All planet Earth produces is the dead bodies of humanity. That’s its only creation.” The man pauses and slides his hand across the sphinx. “Everything else comes from outer space. From unknown regions. Humanity’s life depends on the unknown. Knowledge is laughable when attributed to a human being.” Read more…