Sasha Mashin is one of the most fascinating improvising drummers to emerge from Russia since Vladimir Tarasov of the Ganelin Trio in 1971. There may have been many other drummers in that country favouring and playing music in the Jazz idiom since, but none as interestingly versatile as Mr Mashin. While Mr Mashin does not venture as far out of the stratosphere as Mr Tarasov did, preferring to stay within the diffused boundaries of lyricism instead, Me Mashin is, nevertheless, extremely daring and on this his debut album as leader, Outsidethebox rarely played in 4/4 time for more than a few moments and that too, you will have to wait until the sixth track, the whimsical “Strange Party” – both in its title and the wildly, almost Eric Dolphy-like melodic and harmonic romp that follows. 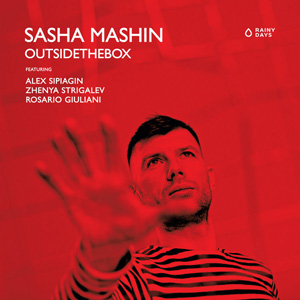 However, Mr Mashin’s penchant for complex metre and the seemingly irresistible urge to mix these up even within a single song is not ornamentation for ornamentation’s sake. Rather seems to stem from the compulsion to make the vivid sounds that obviously knock about in his mind’s mind a reality. In this regard he succeeds marvellously and as a result the listener becomes privy to the breathtaking scope of his ideas. Obviously these ideas see the light of day because he works with composers who understand his vision and artistry completely – especially Zhenya Strigalev and Alex Sipiagin, who have contributed the bulk of this repertoire. But make no mistake it has to take someone such as Mr Mashin to make all of this music that sounds exciting on paper come alive in the recording studio.

Mr Mashin plays with incredible dexterity and virtuosity. With blinding speed and seemingly superhuman power in his arms and legs, and with magical fluidity in his wrists Mr Mashin makes the music leap off the page in a blur of hands and sticks, brushes and mallets together with the fastest pair of feet on a hi-hat and a bass drum pedal. Behind all of this speed and power, however, is the ability to maintain a nuanced lyricism with which he is able to navigate through some of the most demanding harmonics you will ever hear in the music on this recording. From “Jazzmashin” to “Sharp Night” there seems to be no stopping Mr Mashin from creating music with the most incredible sleight of hand (and feet).

It should not go unnoticed that this recording features some of the finest musicians from Russia – such as Alex Sipiagin (now a resident of the US), Zhenya Strigalev – and especially the bassist Makar Novikov. The contributions of the prodigiously gifted trumpeter Josh Evans who rocks on “Some Thomas”, and alto saxophonist Rosario Giuliani whose contributions to “Sipiagin’s Mood”, “7=5” and “Paint” are monumental to say the least. But it is the vocal gymnastics of Hiske Oosterwijk on “Sipiagin’s Mood”, “Jazzmashin” and “Paint” that remain the high water-marks of this recording. The sheer joy with Miss Oosterwijk’s supple, high-sprung voice navigates the melodies makes her lyrics not only come alive but set fire to the songs themselves.

As debut recordings go this is easily one of the most unforgettable in recent memory. One can only wait rather impatiently and with bated breath for what music this extraordinarily gifted rhythmist, Mr Mashin, will serve up next.