Listening to this ethereal, yet emotionally-charged and visual [sophomore] recording by the young Western Australian drummer Ryan Daunt, it will probably not be very long before he becomes the best-known export from Down Under since Troy Roberts. My Daunt is a completely different musician, of course. Where the tenor saxophonist is bursting with pent up emotion which spouts forth with visceral energy, the [younger] Australian drummer is more pensive, his music no less emotional, but it is decidedly more cinematic and also seems to ebb and flow in rugged ups and downs not unlike the great Outback, it would seem.

The music on Essence comes with the rolling thunder of Mr Daunt’s sinewy drumming. But while this comes with a natural preponderance of rhythm, there is a decided melodic quality to what the young drummer plays. He does s using the full array of his drum set. 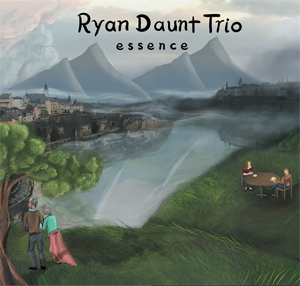 His use of the bass drum is – mercifully – judicious and so does not take away from the low pizzicato rumbling of the bassist, Nick Abbey. Instead Mr Daunt makes elegant use of the tuning of his instrument – a sure sign of the fact that instruction from the likes of [an early mentor] Steve Gadd has paid off in spades.

My Daunt appears to be widely travelled too. But more than anything else, he seems to be open to ideas that come from other sources and not merely those within his immediate [Australian} surroundings. The taunting, snake-like melodic lines of “Soup and Tea” are a wonderful example of this and contain some rather interesting amalgams of Central Asian mugam-like evocations played by pianist Tristan Wills. Elsewhere – using minor modes – this young composer astutely moves the music in and out of Lydian modes, exhorting his pianist and bassist to reach for harmonic variations culled from Phrygian modes.

The musical excursions are decidedly intriguing, each song being more beguiling than the other. “Bad Maths” and “Slow Burn” are two other fine examples of repertoire on this recording. The album has a thrilling finale as the music scales the sheer side of the “Massif”. Ryan Daunt is clearly a novel musical voice and much more is expected from him. His musical partners are also fine musicians and on Essence appear to be superbly attuned to the drummer’s vision and artistry.