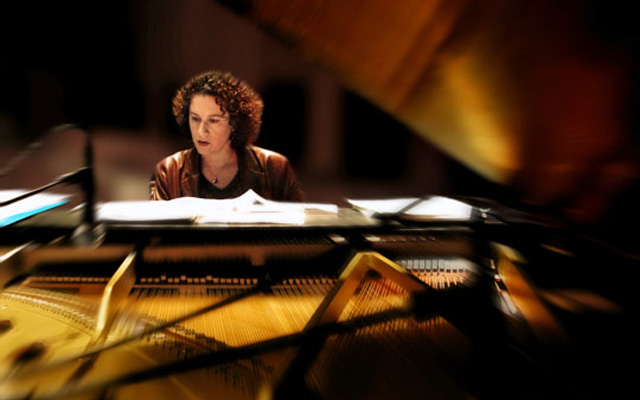 You can always tell when a record is going to be something special to experience. You can tell because it brings together a pianist of sublime talent with a terrific ensemble and Todd Barkan, a producer who has borne witness to music for the sheer love of it and spread the gospel through his legendary club, the Keystone Korner. Most of all you can tell when it celebrates a musical legend. One for Marian – Celebrating Marian McPartland is a simply gorgeous disc. The performances are brilliant, especially from the dazzling pianism of Roberta Piket, who embraces Marian McPartland through beautiful music equally beautiful spirit. That’s what McPartland was made of, after all: beautiful music and spirit. 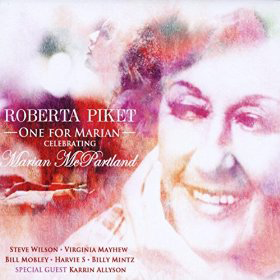 Marian McPartland will forever be remembered by this generation as the host of Piano Jazz. But it is only right that her music live in the memory as well. The piano was an extension not only of her fingers. It became, as if by magic, connected to her heart. And in the mix of emotion and technical wizardry was a refinement that was fervently enunciated in the notes she chose to play. Roberta Piket describes this ever so eloquently in her own playing, as each song becomes a miniature symphony in scope, Piket-enhanced in arrangements of orchestral richness. This is often tempered by content that is stated simply, without over-ornamentation, and yet it is sublime. ‘Threnody’ is a superb example of this. And just when you think you’ve come to expect musical beauty of a certain kind, Piket turns everything into music so emotive that it feels like an exploding heart: I cannot think of a better way of describing ‘Saying Goodbye’, but I make no apologies for that.

Roberta Piket shares with Marian McPartland the ability to invoke landscapes and narratives within their music, so vividly and intensely are they etched. ‘Twilight World’ is given time to unfold expansively, its moments of darkness and light are given with due generosity, While the downward-rushing scales of ‘Kaleidoscope’ are vibrantly given. The repeats of ‘Time and Time Again’ are never merely that – each is announced with a different dynamic as we get a sense of true development. ‘In the Days of Our Love’ with its treacherous repeated notes holds no fears either and in ‘Ambiance’ Piket finds a rare lightness and dexterity that leaves most others sounding ponderous. So completely has Roberta Piket subsumed the experience of Marian McPartland that she has paid her the most profoundly beautiful tributes in ‘One for Marian’ and ‘Saying Goodbye’.

Now I would be remiss if I did not make complete my own tribute to the other members of this ensemble if I did not recognise the tender vocal quality of Steve Wilson’s playing, or the endlessly fascinating songfulness of Virginia Mayhew – both on tenor saxophone and clarinet. I wish I had heard more of Bill Mobley’s utterly natural soundscapes, because they represent some of his finest work. Karrin Allyson’s voice sounds heavenly on ‘Twilight World’. Harvie S on bass makes any music come vitally alive and, of course, no drummer completes Roberta Piket like Billy Mintz does. I suspect that these musicians had a lot of fun making this record and I am sure that it will not go unheard… not even by Marian McPartland, who suddenly seems with us once again.

Track List: Ambiance; One For Marian; In the Days of Our Love; Twilight World; Threnody; Time and Again; Saying Goodbye; Kaleidoscope.