Randy Napoleon is not only one of the more admired guitarists today but he is also looked upon as a superb musician, much sought-after for his idiomatic interpretation of music. So it is hardly surprising that he would turn out one fine album of songs after the other. However, even by his own exacting standards this one – Puppets [The Music of Greg Hill] – is absolutely outstanding – both in themes and the exquisite artwork that accompanies it. However, that’s not all… 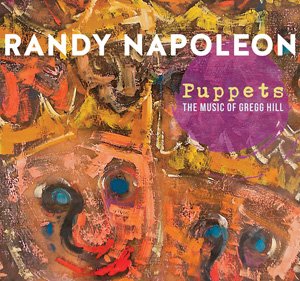 This album also features one of the most prodigiously-gifted vocalists, Aubrey Johnson, who with her [often wordless] vocalastics turn many of these songs into elliptical, unpredictable magical offerings that open out gloriously in dramatic episodes that encompass the emotional and physical contours of the music to dynamic effect. “Andy’s Lament” whish jumps out at you is a fine example of what Miss Johnson can do with melodic content once she gets her proverbial hands on it. In her interpretative stance and application of colour Miss Johnson ideally matches My Napoleon to such an extent that there is a real sense of a performance being created in complete accord, song after song, after song…

Although Miss Johnson may not be the only star on this album – Rodney Whitaker on bass, Quincy Davis on drums and Rick Roe on piano are three of the constellation of stellar musicians who illumine this date. But make no mistake [although you’ll be forgiven if you are swept off your feet by Miss Johnson’s star turn], this is Mr Napoleon’s star turn too. His sensual playing is rich and mature and his burgundy tone is ideally suited to the softer textures of the music of Greg Hill, which is the creative highlight of this album. He continually surrounds these songs with a sweetness, light, ardour and swinging grandeur.

The rest of the cast embellish the music encompassing melody, harmony and rhythm with stylistic breadth that makes the entire repertoire unforgettable in every department. Yet pressed, I have to say [once again] that Mr Napoleon is one of the finest idiomatic interpreters of this repertoire. He – together with Miss Johnson – penetrate the heart of the musical matter. Rhythmically razor-sharp and focused throughout, they have imbibed the music’s every inimitable colouration and nuance.

The guitarist in particular, by caressing each sculpted phrase, one harmonic variation after another, employs a glancing rubato which is of a caressing warmth and suppleness, a constant ebb and flow that characterises Mr Hills sumptuously bejeweled music. For novel good measure Mr Napoleon also adds creativity and lyrical words to three of the songs. Meanwhile in Aubrey Johnson we have a sculptress and very possibly one of the finest interpreters of song. And in Randy Napoleon we now have a major guitarist-musician who has found new realms of colour and new avenues of excellence and ways to seduce even the unsuspecting listener.