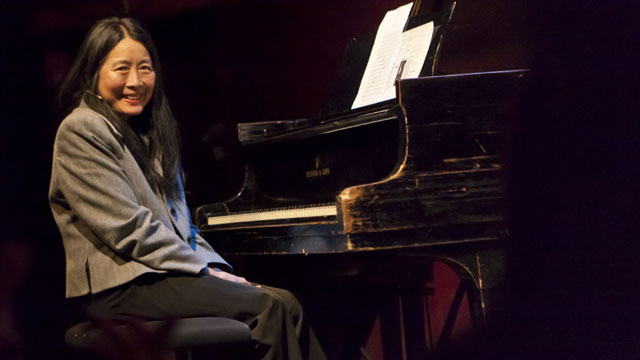 Pianist Pi-Hsien Chen will not be raising eyebrows at Stockhausen HQ, wherever that may be. She is not inciting a revolt, nor playing these piano pieces with any degree of whimsy. Her excellent temperament and obvious degree of study has set her up for a most the axiomatic reading of the six piano pieces. Stockhausen, after all, demanded absolute observance of temperament. And Pi-Hsien Chen delivers exquisitely. There is evidence of this in each of the pieces. Each is notated with simple, easy-to-play melodies and accompaniments. Stockhausen instructs that his melodies always be repeated three or four times. Tempo and expressive mood are to be maintained, but repetitions must be varied by editing unnecessary notes out, or leaping between octaves, or even varying instrumentation. Stockhausen also allows for his melodies to be puréed down to a single note; but verboten is adding material as cosmetic decoration or philosophical critique. 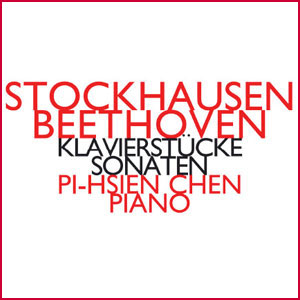 The Piano Pieces I to 5 derives from a similar frame of mind. His distinct pattern here allows for performers to respond to diacritical marks and graphic design with spontaneity. He always made a distinction between spontaneity and improvisation always fearing that performers of his music would be locked into an empty style and/or the rigidity of rules. The music to be interpreted with spontaneity implied a certain sense of emptying the mind before approaching his music—any music in fact. The sounds must emanate, he seemed to say, from brand new charged particles in the brain that synapses of which would rush to the fingers unhindered by argument The Piano Pieces emanate from this hypothesis. Pi-Hsien Chen is a protagonist equal to these demands of the idiosyncratic composer. She is quintessential especially through the structures on the sixth Piano Piece. Taken as a whole, she also uses percussive punctuation and interesting trills to move the melodies to a place beyond the common realm into one that is also spectral in nature.

The crucial thing to remember about Beethoven’s piano music is that he wrote solely with himself in mind. Beethoven’s independence and self-reliance colour each of the thirty-two sonatas, from the three pieces that comprise Opus 2, begun when Beethoven was but 23, to the final Opus 111, heard here, a composition so extraordinary that Thomas Mann devoted part of his novel Doctor Faustus to an exposition of its form. His attitude towards the piano was typical of his attitude towards all instruments, in that everything he wrote posed a challenge to the piano’s resources. In fact progressing at an astonishing rate during this period: the range of notes was extended by two and a half octaves, the sustaining pedal was developed and there was a marked difference between the light-toned Austrian instruments (which Beethoven seems to have preferred) to the heavier actions of French and English pianos Even so, with the last five sonatas Beethoven went as far as the instrument could possibly take him, and then looked towards the string quartet as the ultimate means of expression.

Everything that Pi-Hsien Chen does with her Beethoven justifies the recording of these two vaunted sonatas. Her fluency is impressive and the technical issues presented by these sonatas – Opus 101 and especially Opus 111, arguably the most bolshily virtuoso in the entire cycle – are handled with ease. And she never does anything interpretatively jarring. She even takes the odd risk here and there and this is smartly done in the final movement of Opus 111, where she brings about a miraculous change in colour in the lead-up to the coda in the finale of the 111. There is no tip-toe-ing in the allegro and she does not play down the sudden onslaught of notes. In fact she adds much to these sonatas, her playing is unrelentingly adept revealing the finer nuances of the pieces. In this regard as well as throughout the pianistic dissertation of Beethoven’s values, Pi-Hsien Chen is absolutely brilliant.

The Chinese pianist, Pi-Hsien Chen, began to take piano lessons when she was four. At the early age of five she gave her first public performance. The nine year old girl was sent to Germany to continue her studies at the Musikhochschule in Köln. One year later, she was admitted in the class of Hans-Otto Schmidt-Neuhaus. She received her diploma as a concert pianist in 1970. In the following years she pursued her studies with Hans Leygraf and took part in piano courses given by Wilhelm Kempff, Tatiana Nikolayeva and Geza Anda. In 1972 she won international appreciation with a prize at the Concours Reine Elisabeth and the first prize in the competition of the Rundfunkanstalten in Munich (ARD International Piano Competition). Later she won the first prizes at the Arnold Schonberg Competition in Rotterdam and at the J.S.Bach Competition in Washington D.C. Read more…