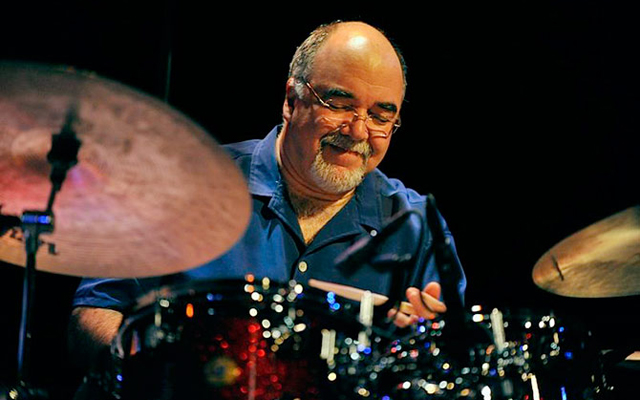 Of all the drummers alive and active today, few do more for the history and aesthetics of percussion – indeed all music really – than Peter Erskine. First of all, Erskine can play in any idiom and create practically any rhythmic groove; there are few more talented rhythm merchants in the business. His work on Weather Report, Jaco Pastorius, and now, his own recordings not only feature his ultra-cool drumming, but also his ability to create a groove and stay in ‘the pocket’ while leaving his soloists to wander to heaven and back and find him still there, where they left him. The years have not dimmed his genius; not one bit. On the contrary, Peter Erskine has grown to become one of the finest percussion colourists in music.

Far from laying out a rhythm for musicians to follow, Peter Erskine wields sticks and mallets like he does brushes. He doesn’t beat the drums as much as dip into his palette bringing his sticks and mallets, and brushes bringing them out with blurs of colour with which he begins to paint a musical canvas. Cymbals chatter like excited bons vivants. All manner of drums respond as the canvas comes to life, and the exalted melody begins to be sung, soaring heavenward as if by magic. Some down-strokes are feather-light, caressing skins and cymbals. At times it feels as if the drums are barely there; so ghostly and ethereal is Peter Erskine’s playing, as if complying with the bard, who once called for music to soothe the savage breast…

Peter Erskine burns quietly in the bluest part of the music’s flame and the result is this 2016 recording In Praise of Shadows, one of the year’s most formidable achievements. The technical mastery of the musicians reaches its highest level, and Erskine lead’s the way with profound insight into the deepest recesses of the music. 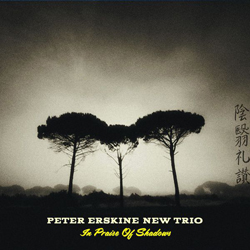 The disc begins with profoundly beautiful whistling by Judd Miller who leads the ensemble down a magical Maurits Escher-like staircase descending into endless shadows and light, and you are inexorably charmed right out of the gate. Few performers reach the level attained by Peter Erskine on “Sukiyaki”. Virtuosity is not so much the music’s aim as expressivity, yet the drummer plays with brilliance throughout. On “Silhouette Shadows” and on “Distant Blue” a little later on in the proceedings Verdan Ovsepian and Damien Erskine are responsive to the music’s changing moods, and express them with an enormously varied tonal palette. “Smile” is played from the darker perspective of sadness and Artyom Manukyan on cello adds his brilliance to the Chaplin’s classic song.

In a characteristically witty turn Peter Erskine suggests that The Doctor might want to change his mind and offer a Second Opinion (as opposed to what might have been diagnosed on the previous album presumably). However, I’ll take both diagnoses. Deploying the widest possible range of colour, dynamics and articulation on the music of 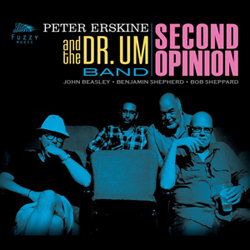 Second Opinion Peter Erskine brings a surprisingly varied degree of emotions to music that can often sound unremitting – such as “Did It Have To Be You?” and “Willow Weep For Me”. On the latter Erskine and the ensemble adopt slightly faster speeds for the choruses than a number of their rivals, but are much more adept at handling the tricky change in tempo; even ratcheting up the tension to the maximum as John Beasley’s violin engages with Bob Sheppard’s saxophone and Benjamin Shepherd’s bass. The album is full of numerous Peter Erskine sleights of hand, which are all marvelous in their restraint, their mystery, their hint of the unhinged in vaguely familiar patterns. At the heart of the album lies the soul of Peter Erskine’s legendary and simply incomparable rhythmic trickery.