These four musicians come with a reputation for inhabiting the outer realm of musical notation, which is where – notation be damned – melody is still ever present as is harmony and rhythm, all formal aspects of music, but completely reinvented in time and space, developing a geometry designed by a French curve rather than a set square. Not that mathematics is what drives the music. On the contrary and as the title – Tales Out Of Time – suggests the musical elements pirouette turning line after line into double helical matrices. Composition and freedom collide in narratives and brush strokes as if this were a musical book lavishly illustrated by painted abstractions. Thus unfolding in dramatic fables, these extraordinary chamber works will find the listener rendered speechless by unrepentant lyricism against a backdrop of startling swatches of colour. 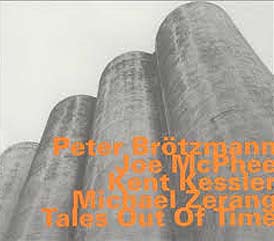 Rather than being daunted by the sheer prospect of the ascent and drop of music that leaps and bounds as if through gulch and canyon, these musicians embrace the almost impossible challenges with verve and gusto. The Quartet set the bar very high with their astoundingly fresh and supple readings of what appear to be sometimes spare and sometimes crowded soundscapes. Peter Brötzmann, Joe McPhee, Kent Kessler, Michael Zerang swoop through the musical topography as if it were designed for unrestrained leaping, charging and gamboling rather than for rigidly structured negotiation. The rasping timbre of Peter Brötzmann’s saxophones duke it out in legendary pugilistic duels with the characteristically lyrical horns of Joe McPhee, Muhammad Ali’s proverbial term ‘float like a butterfly and sting like a bee’ is easily recognisable in the partnership, while the gentle berating of the rhythm section of Kent Kessler, Michael Zerang is the glue that holds it all together.

The writing, if one can call it that as this music devolves more from thematic sketches than anything else, is sharp and incisive and sustained by rugged textures. Aural sound worlds emerge like gigantic waves that ebb and flow, sometimes building in relative silence through exquisite gradations of dynamic and timbre before they disintegrate in colossal counterpoint as composer and musicians fight to retain ambiguity of mood and demeanor, as in “Alto Lightning In A Violin Sky” and to a greater extent in “From Now Till Doomsday”. Breathtaking later-day portamentos rock the brass and woodwinds as Mr. Kessler and Mr. Zerang create enormous staccatos encased in warmly voluptuous sound. All the while, rhythmic instability is brilliantly managed by each of the four musicians. Just listen to the adrenalin-pumped “Cymbalism” for instance and you will hear what I mean.

Contrast all of the above with – yes – even delicate tracery in “Something There Is That Doesn’t Love”, “Blessed Assurance” and the two “Stone Poems”. The quartet brilliantly captures the febrile quality of these modern ballads with precision and even grace. Throughout they relish these moody as well as the raucous in poignant ways. Often lyricism changes to more agitated writing but the gear-change is so smooth that you simply don’t notice it, so naturally is it done. The recording is immediate and present and when a group of musicians combined scholarship and performance in eleven superb pieces, what more could you ask for?

Track List: Stone Poem No. 1; Something There Is That Doesn’t Love; Master Of A House; Cymbalism; Alto Lightning In A Violin Sky; From Now Until Doomsday; Do You Still Love Me/Did I Ever? In Anticipation Of The Next; Blessed Assurance; Pieces Of Red, Green And Blue; Stone Poem No. 2

Peter Brötzmann is a German artist and free jazz saxophonist and clarinetist. Brötzmann is among the most important European free jazz musicians. His rough timbre is easily recognized on his many recordings. Read more…