What would a perfect tribute to the legendary Flamenco guitarist Paco de Lucía be? It is easy to suggest a tribute by some of the greatest musical partners he ever had in his lifetime. But even when you suggest such a thing, nothing could prepare you for an album of such beauty. Not even such names as Chick Corea, Chucho Valdés, Michel Camilo, Ivan Lins and Dhafer Youssef… That is because there are eleven other reasons why this is one of the most unforgettable tribute albums ever put down on record. Ever.

Made fifteen months after the tragic death of Paco de Lucía the stellar cast of musicians brings the poetry of Paco de Lucía to music that might warm the heart of the maestro. In Entre 20 Aguas – A la música de Paco de Lucía all of the performances have a swagger and brio and in, for example, Pepe de Lucía’s “¡Vámonos, Hermano!” an endlessly beguiling nuance, colour and cantabile. Equally regal Carles Benavent shows an even greater wealth 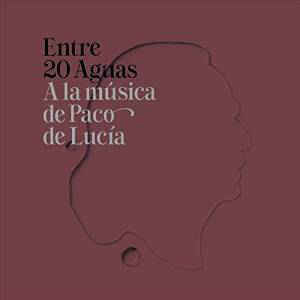 of poetry and inflection while recalling the legendary sense of impulse and ingenuity that flowed from the fingers of Paco de Lucía. In “Al Gran Paco” Chucho Valdés is heaven-storming at the climax at the beginning, white hot in the middle, where everything is driven to its exultant limit.

The music of Dhafer Youssef is given with that instantly recognisable catch in the keening voice, that palpable hesitation in the vocal line. Dhafer Youssef is, after all, the greatest of the Mediterranean singer-poets. He is also caught in the heat of the moment by a frightening sense of the loss of the Flamenco guitarist and he is spectacularly poignant, his lines being sung out of an elemental pain and loss. And this is true of the remaining repertoire, where the technique remains monumental and all-embracing, whether in the brilliant fury of Abraham Laboriel’s “Aguas de Funk” or in the delicate tracery of Michel Camilo’s “Al otro lado del agua”.

The “Olhos de meu pi” of Ivan Lins provides yet another wonder of scintillation and patrician feeling, making it true to say that no list of musicians, living in any part of the world play or record such a tribute with such abandon or personal commitment. Having been soothed by the various instruments’ equal temperament it bears mention that this music is of a distinctly homage-like temperament. The programme here is full of pathos and power. The moving pictures of Paco de Lucía that have been imprinted on the listener’s soul are sparkling and memorable. There are no highlights to speak of.

Every song is a highlight. The engineering is top-drawer, matching the superb musicianship of the various musicians. However, it pays to never forget who the honouree is: Paco de Lucía, a greater guitar maestro was never born to Spain, except Andréas Segovia. And that’s a fact.

My name is Francisco Sánchez Gómez, alias Paco de Lucía, and I’m a guitarist.
…If you would invite him to your home
To eat: soups and broths (anything with a spoon)
To drink: red wine
Don’t talk to him about: guitar, his nightmare
On the stereo: Camarón “the greatest genius I’ve known”
After lunch: a movie by Billy Wilder or Kieslowski’s Three Colours trilogy
A book to lend him: Any of Oscar Wilde’s. No philosophical book because he says that after reading Ortega y Gasset’s work he ended up analysing everything and thus losing his sense of humour. —Casilda Sánchez , 2004.