There is a spiritual quality the Kate McGarry brings to everything she touches. Her pristine diction and breathtaking vocal purity pierces the heart like few vocalists can do. She has so absolutely bewitched Mike Holober’s album Balancing Act that it’s hard not to listen to the music without a lump in the throat. Now here’s something worth considering. Could anyone else have handled Mike Holober’s music as well as she does? Mike Holober’s (piano) music throws up technical challenges that are, famously, in a class all their own. Rhythmic intricacy is his calling card, which is why Brian Blade is here. The buzz-phrase ‘new complexity’ hangs around like the ghost of genres past (Remember his take on Herbie Hancock’s Maiden Voyage entitled Maiden Voyage Suite with the Westchester Jazz Orchestra)? 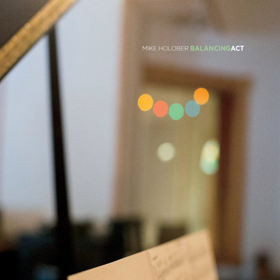 Out of the richly atmospheric performances on this recording certain pieces emerge as almost cinematically graphic. Cue in Canyon, Sighs Matter and When There Were Trains. One easily pictures eddies of emotion on Sighs Matter, despite the quaint pun of the title. Raw emotions are couched in absolute gentility and that is not a bad thing if it is Holober’s shtick. And yet everywhere on this beautiful album the music is immediate and powerful. There is also psychological drama seemingly on an epic scale of Book of Sighs and Sighs Matter. This is surely in the musical compositions that Mike Holober brings to the table but it comes alive with in the vocalastics of Kate McGarry and, of course, the performances of Marvin Stamm, Dick Oatts, Jason Rigby and Mark Patterson. And this simply means that the emotional nakedness and loving attention to detail recall the very best music that Holober has ever written.

The same probing, questing intelligence is brought to bear on more conventionally virtuoso music that dapples the rest of the disc. TO music that all too often leaves one rudderless and gasping for air in wave after wave of opulently ambivalent harmony, Holober brings orientation and direction without sacrificing sensuality and mystical aura. His glacial arpeggios rippling under Kate McGarry’s voice make exquisite listening as you become aware of his uncanny variety of touch, tone production and judicious pedalling. The result is music that is audacious in its originality. The irrepressible nervous energy animating from the glissando-like bending of notes, lines and melodies becomes the pivotal role for not only Kate McGarry to play, but also the rest of the ensemble as well. This is music at its most thrilling.

Listening to dozens of new piano recordings each year a sort of private rating system develops even if one is too bashful to share. For me, however, discs warranting the highest praise are those that persuasively introduce new music that chart new and interpretative territory for works or that demonstrates something fresh and heretofore unrecognised in music long familiar. These are recordings that contribute significantly to common understanding and appreciation. Mike Holober’s contribution in this release could scarcely be more generous.

Track List: Book of Sighs; Idris; Lullabye: Goodnight My Angel; Grace At Sea; Piece of My Heart; Sighs Matter; When There Were Trains.

Pianist, composer/arranger, and educator Mike Holober served as Artistic Director/Conductor of the Westchester Jazz Orchestra (WJO) from 2007-2013 and since 2011 he has been Associate Guest Conductor of the HR Big Band (Hessischer Rundfunk, Frankfurt, Germany). With WJO he has written and conducted for Joe Lovano, Kate McGarry, John Scofield, John Patitucci, Randy Brecker, and Paquito D’Rivera. Read more…