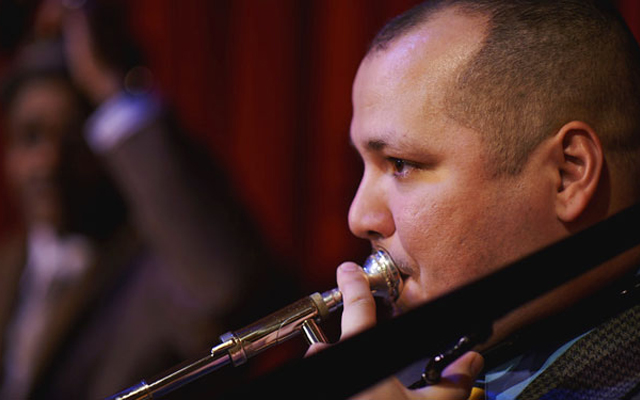 Michael Dease can’t help but think big. It’s just the way he is. Hot on the heels of Father Figure (Posi-Tone – PR9151, 2016), a glorious album that forced its way out of the African-American vortex with the words “Each One, Teach One” comes All These Hands (Posi-Tone – PR8160, 2017), another intensely thoughtful album. This time around, Dease pays due attention to the real ancestors of the Blues and Jazz – the African-American musician: as the quote from Langston Hughes on the inside of the album jacket tells us “A long time ago,/An enslaved people heading toward freedom/Made up a song…” Songs, they are; and made perfectly bittersweet by the elemental moan of the trombone of Michael Dease who floats his boat with a mighty crew that includes three of today’s finest musical wayfarers: Gerald Cannon, Rodney Whitaker and Rufus Reid – bassists all. Not that the contributions of other musicians is any less outstanding, but these three bassists keep things on the straight and narrow as well as the high-flying. 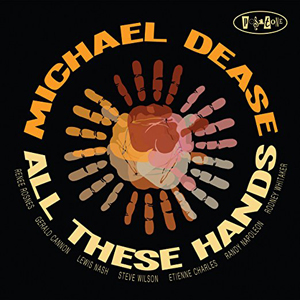 As with everything that Michael Dease does, here too: less is more. It’s a paradox that Dease pushes to the hilt here, crafting orchestral soundscapes that manage – somehow – to be monumentally miniscule, enormously small. Each of the twelve works on All These Hands presents a sound environment of wisps, susurrations, noises, growls, slurs and glissandos, and the odd pitched note. Key to the music’s success, though, is Dease’s subtle layering of the various instruments and sound types. Inspired, the trombonist says, by watching the storm of the Blues and Jazz, as if through his window, an avalanche in reverse coming fast and furious, in sorrow and joy, with a primeval force, impossible to ignore. “Good & Terrible” and “Territory Blues”, for instance, with human speech-like trombone intonation and poetic glissandos, dwell in the depths of the emotional pain and almost hysterical laughter, evoked by different shades and densities of sound passing around from trombone to bass; from Dease to Cannon, and then Dease to Whitaker. In this way both the delicacy and brutality of the music’s origins are magnified and become hyper-real on the aural canvas.

Similar paradoxes – conundrums, too – pop up in “Gullah Ring Shout” and “Memphis BBQ & Fish Fry” wherein Michael Dease is joined by guitarist Randy Napoleon (“Gullah…”) and saxophonist Steve Wilson (“Memphis…”) each of whom ‘sing’ in bluesy semantic tones. Magically, it would seem, guitar and saxophone magnify the mournful growl of the trombone to seemingly echo in the aural jungle undergrowth as they trade rhythmic signals harmonic shimmering, each instrument exuding soft cries. This delicate approach suggests something like a whole ecology of sounds. The disc closes with “Up South Reverie”. The piece recalls traditional elements of New Orleans lazily making their way as if they were swamp gators sidling up to riverboat; legato bass, delicious harmonics by Rodney Whitaker, clear rhythms – which are then stripped away to reveal the pangs of birthing Blues and Jazz. The section of glissandos and rasping textures suddenly open to a terrific spatial expanse, drip-drip-drip that rises into a frenzied spume of double bass to close out the album.

But it’s not simply here; this spectacular depth of musicianship is quite impressive and precisely rendered by musicians from Michael Dease down to every other musician in homage to the founding fathers and mothers of Blues and Jazz.