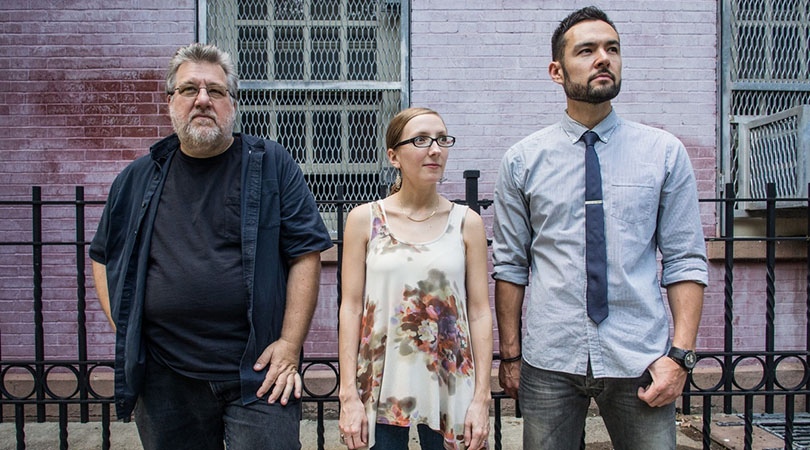 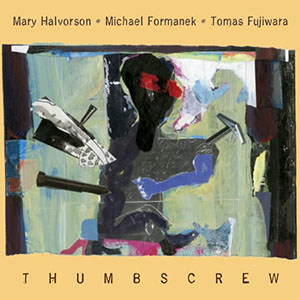 The first listening of any record is more often than not a cursory one and does not reveal much. But this is not true of Thumbscrew. This self-titled album is full of angular music, with chopped rhythms and maddeningly rich harmony, almost all of which appears to be played by guitarist Mary Halvorson, with generous help from bassist Michael Formanek and drummer Tomas Fujiwara. If the titles are to be believed, this album bisects Frank Zappa’s We’re Only In It For The Money and the Beatles’ Sergeant Pepper’s Lonely Hearts Club Band, which is to say the music swings wildly between the sardonic and the hallucinogenic. In fact, at a pinch, there might be something of Abbey Road as well. With such riches in reference to context, the music can only be riveting and exciting from the point of view of the titles and the music as well. And this is only upon first hearing Thumbscrew.

Next comes the real listen; the second and, invariably with anything that Ms. Halvorson is involved in, a third hearing upon which time the internecine; the guts of the music begins to unravel. It becomes apparent here that Ms. Halvorson is not the only star of the recording. So is Mr. Formanek (who has long since shed the nervousness he had when in 1986 he was in Freddie Hubbard’s band, replacing it with much nervous energy); and then there is Mr. Fujiwara as well. There is a palpable metallic flavour to the music and much of this has to do with Ms. Halvorson channeling Jimi Hendrix via Sonny Sharrock. All this while she still sings in a characteristic and singular voice that is wild and seemingly untameable. This is only a part of the remarkable show-stopping music that forms the magnificent treat on the album. A true revelation is Mr. Formanek’s work as a composer. “Cheap Knock Off” and “iThumbscrew” are not the only sardonic pieces of music on the album, but certainly among the finest. Ms. Halvorson’s “Fluid Hills in Pink,” while conjuring up all that is feminine are also suitably LSD-like; which, of course, they might very well not be, but the chart certainly brings to mind “Strawberry Fields Forever.” This is hardly a bad thing for an album that has the rollicking energy of a good old rock and roll album. However, these musicians will never leave it at that. Not Thumbscrew…

There is something infuriatingly new (in the nicest sense of the term) about this album. The jagged edges of the changes are reminiscent of Thelonious Monk and some of the bass-line melody delights in the same way that Herbie Nichols’ music delights. The mighty slather of dissonance heaped upon the tangled up and blue melody is a heady feast for the mind’s ear. “Buzzard’s Breath” delights in just such a manner. And while “Still…Doesn’t Swing” drips with irony throughout, it does swing mightily. It is music such as this that makes this band something to die for. It is hoped that much more will come from the pens and the instruments of these musicians, be it alone or together.

Thumbscrew, a band consisting of three well-established leaders on the new jazz/new music scene, make inviting music full of wonder and discovery. With their eponymous debut album, they document the group’s commitment to new music created specifically for this ensemble.

While Michael Formanek (double bass), Tomas Fujiwara (drums) and Mary Halvorson (guitar) are all known for their prodigious capabilities as improvisers, Thumbscrew is more of a composer’s vehicle. While many cooperative bands draw on material recycled from other projects, “One of the things we said at the beginning is let’s just write music for Thumbscrew and it will only be Thumbscrew music,” says Formanek. “It really is a three-composer trio, and all of our tunes have our basic aesthetics attached. But we want everybody to have input. Nobody’s afraid to make a decision. It’s one of the first co-ops I’ve been in where everyone’s really willing to take control at any given moment.”

With each musician contributing three tunes, the album encompasses an array of textures and strategies, while maintaining a consistently open and transparent sound. Generating tremendous intensity without necessarily increasingly volume or density, Thumbscrew buzzes and crackles burns and croons. The group is both open and composer-like. Part of what makes the band’s music so engaging is that they draw widely and deeply from any number of sonic sources.

They first worked with Formanek when he subbed in Bynum’s band in 2011, and the chemistry between the three was so readily apparent they immediately started looking into performance opportunities as a trio. This fine, distinctive effort is the result of 2 years of planning, rehearsing and gigging.