Subtlety couched in simplicity is the pervasive quality that guitarist Kristen R. Bromley conveys so luminously on this comprising repertoire almost entirely composed by her. The music doesn’t often raise its voice much above a whisper, and even when it does , the narratives are skillfully crafted to maintain a certain expressive decorum. Miss Bromley [as a composer] alters harmonies and structural elements with impressive restraint, always heading in directions that surprise and captivate the ear. 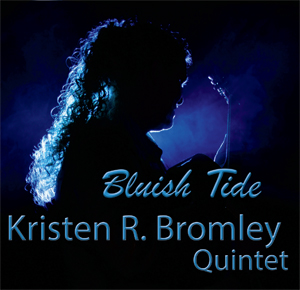 Most of the pieces presented here have been suggested by the blues programmatic structure – hence the title Bluish Tide the ‘Tide’ of the title [further] suggesting a wash [or brush-stroke] of a certain sentiment associated with that African-American song-form. However, Miss Bromley infuses her the secular with the sacred and that is a storyline that pervades all of this music, so it pays to give due attention to that fact to understand the storylines. This is as true [especially] of the imagery of “Pillar of Fire” as much as it is in the obviously-stated [imagery] of “O Great God = How Great Thou Art” and in the long, diaphanous inventions of “Through a Veil”, which unfolds in a series of ethereal gestures.

In other places Miss Bromley’s palette is stretched in telling ways [such as in “Beyond Canyon Walls” and “Paint Me a Picture My Love”. Here too, the guitarist’s music evokes a series of moods and emotions that have [in the former] an edge-of-the-seat quality and a heart-on-sleeve in the latter song. Her playing is always impeccable, informed no doubt by equal parts pedagogy and virtuosity. Ever cognisant of this the other musicians play her tunes with reverence and compassion, yet bringing their [individual] extra-special virtuosity and singular voices to the music.

Miss Bromley is most certainly a guitarist to watch. She performs with consummate artistry, blending superior control and tonal lucidity with a cohesive sense of line and motion. This music could hardly be better served.