The liquid fire of Joshua Breakstone’s playing is very much in evidence on his 2015 release 2nd Avenue – The Return of the Cello-Quartet and what a glorious work or guitar-playing art it is. The music abounds in both heat and gentility. For instance sample “Hit it” for example, which shimmers and darts, still seeming to have all the time in the world when it comes to detailing. While in the case of “I wish I knew” which opens gently but soon energises confidently and infectiously. All of this, of course begins with the raffishly exciting version of Lee Konitz’s “Thingin” that launches the mighty performance of this, perhaps his finest work. 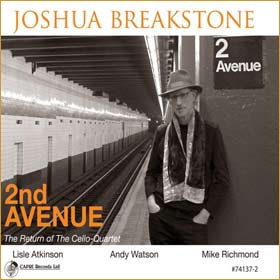 Mr. Breakstone is an extraordinary guitarist with an extraordinary technique. HIs playing is full of exciting twists and turns adding the element of surprise to the magic of expression, dynamics and soulful emotion. His lines can be long and lope like the endless leaping of a deer that smells the first rain amid the heat of summer. But sometimes they are sharp and short as the guitarist stabs at notes as if he were masterfully wielding an epée. All the while Joshua Breakstone plays with grace and fire. Mr. Breakstone implores you to listen intently as his silken music captivates. At which point – as Oscar Wilde once said – the only way to resist temptation is to yield to it. This is true of every song on this album.

The guitarist’s choice of repertoire is careful and wonderfully balanced. It mixes the quiet – all tip-toeing and whispers – with the energetic – like wind rushing by your face as you face-to-face with a great gust at sunset in autumn. In time to come this repertoire may or may not become library choices for a guitarist. It is after all the work of a master, albeit one who has been woodshedding somewhat under the radar as far as recordings go. And what a fine quartet to break out with: bassist Lisle Atkinson who many may not know gave a fine account of himself in the New York Bass Violin Choir shepherded by Bill Lee, Andy Watson a drummer technically brilliant enough to be as comfortable in an ensemble with James Moody as he is in an orchestral setting and Mike Richmond, heard here on cello, pizzicato, but with the wherewithal to play with Ravi Shankar as well as Miles Davis.

Together these musicians put a new spin on some fine repertoire giving it the full treatment in a manner that deserves more than casual recognition. This Capri recording is also outstanding. I hope that the label will repeat the beauty of this one with a future Joshua Breakstone and also hope that “The Return of the Cello-Quartet” will not be the last we will hear of Joshua Breakstone.

Track List: Thingin; Home; I’m an old cowhand; I wish I knew; Evergreenish; The lamp is low; Hit it; My conception; 2nd Ave blues for Imahori.

“Fire in velvet… A fitting description of Joshua Breakstone’s jazz guitar,” wrote Paul Weidman in The Santa Fe New Mexican. “His flowing lines on up-tempo cookers are impeccably clean and fiery, bearing the mark of a first-rate improviser while his chordal work on heartbreaker ballads in the final word in finesse,” raved Guitar Player magazine. Read more…