John Scofield is every bit the force of nature he was in his earliest days when he set the guitar alight with then-Young Turks such as Larry Coryell and Philip Catherine on Charles Mingus’ Three or Four Shades of Blues in 1977 or around the time he released his earliest (eponymously titled) work, which was preceded by the John Scofield Live album on the German Enja label. His lines redolent of raspy harmonic conceptions and round – and sometimes elongated, elliptical lines, formed of black and blue gleaming notes, thick as treacle. His is a burbling sound-world that is characterised, nevertheless, by the high-end melodicism that made the triumvirate he comprised with Mr Coryell and Mr Catherine, titans of the new, visceral and yet elegant sound of the electric guitar that had seeped into Jazz during the 1970’s. 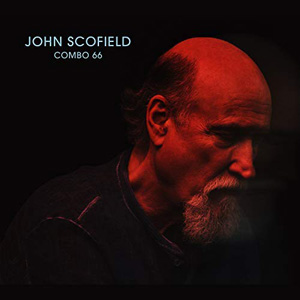 Combo 66, helps not only mark – he tells us – his sixty-sixth year but also conjure the lyrical romance of “66” that became part of counterculture with (among other things) the iconic “Route 66”, the “Main Street of America” or the “Mother Road”, which is again evocative of music just as much as it is about a famous highway. But to describe the music as a neo-Romantic event as such gives the impression of post-70’s overcooking when in actual fact the whole project is a masterpiece of subtlety. Mr Scofield’s take on the lineage of The Cool sees him summoning translucent woodwind-like tones that float from the taut strings which simply bend to his will as the black dots jump to life and off the proverbial page.

From songs such as the raucous jangling of “Can’t Dance” to the sweet delicacy of “Willa Jean” and “I’m Sleeping In” It’s no surprise to hear how well integrated this mature music sounds. Mr Scofield’s approach is, as ever, well-formed and yet reflects the brimstone and fire of youth as well as the well-honed approach crafted from years of experience. Yet his style remains deceptive, his raw-silk-like but often limpid, euphonious tone artfully leavens his logical, but nonetheless oblique and unpredictable melodic thinking. The added support of inspired, empathetic musicians – pianist and organist Gerald Clayton, bassist Vicente Archer and drummer Bill Stewart – gets right inside the music – both Mr Scofield and Mr Clayton taking turns stabbing through the melody and rhythm.

The surprises, when they come, are highly effective but discreet: a gamelan-like riff is played as pizzicato harmonics, a delicate curlicue of a bass line underpins what often sounds like a Gaelic lament in “Icons at the Fair”, and the close-knit ensemble passages throughout often develop from a single characteristic “Sco-phrase”. The recorded sound balances great detail with incredibly soft warmth.