Home Music Jane Ira Bloom: Wild Lines – Improvising Emily Dickinson
If it were possible to match instrumental tones and textures to the tone and timbre of poetry then it’s hard not to think of how close the sound of the soprano saxophone is to the poetry of Emily Dickinson. The range and available registers make it, quite simply, the most eligible to describe the music in Miss Dickinson’s poems. Having said that there is no better fit for the purpose of rendering Emily Dickerson’s poetry to music played on the soprano saxophone than Jane Ira Bloom. The soprano saxophonist, in turn, performs the monumental task of breathing new life into the exquisite imagery and rhythmic peculiarities of Emily Dickinson poetry on Wild Lines: Improvising Emily Dickinson, an extraordinary two-disc set that lives up to the all-important subtitle of the recording.

Jane Ira Bloom is not the first music to become fascinated with and make music from Emily Dickinson’s poetry. Composers such as Aaron Copland, Nick Peros, John Adams and Michael Tilson Thomas before her have used her texts for art songs. However much of a cliché it might sound like it bears mention that what Miss Bloom does with the poetry is unique, highly personal and altogether different. The extensive use of dashes and unconventional capitalization in Emily Dickinson’s manuscripts, 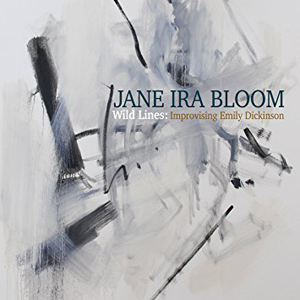 and the idiosyncratic vocabulary and imagery, combine to create a body of work that is “far more various in its styles and forms than is commonly supposed”. Emily Dickinson also often avoided pentameter, opting more generally for trimeter, tetrameter and dimeter.

Sometimes her use of these meters is regular, but often it is irregular. The regular form that she most often employs is the ballad stanza, a traditional form that is divided into quatrains, using tetrameter for the first and third lines and trimeter for the second and fourth, while rhyming the second and fourth lines (ABCB). Though Dickinson often uses perfect rhymes for lines two and four, she also makes frequent use of slant rhyme. In some of her poems, she varies the meter from the traditional ballad stanza by using trimeter for lines one, two and four, while only using tetrameter for line three. Unique in all renditions Jane Ira Bloom has followed the idiosyncratic style and structure of Emily Dickinson’s poetry to create the fifteen tracks on Disc One.

The interpretation of accents and rhymes by use of exceptionally matched accenting and spare and angular rhythmic pulses Jane Ira Bloom turns in an equally remarkable performance on Disc Two as she matches Emily Dickinson’s lyrical poetry with composed and improvised music. Here Miss Bloom must navigate the poetry very differently as she is joined by Deborah Rush, who recites the work. Here too the spare phrasing matches the rhythmic reticence, reclusive temperament and lyric strains of Emily Dickinson’s poetry with similar styling of her own. Gorgeously imagines and created imagery to match storm, wind, the wild March sky (“Wild Lines”), sunsets and dawns (“Bright Wednesday”), the birds and bees, butterflies and flowers of her garden (“Cornets of Paradise”), all come alive accordingly.

And just as the coming of the first robin was a jubilee beyond crowning of monarch or birthday of pope; the first red leaf hurrying through “the altered air” an epoch. Immortality was close about Emily Dickinson; and while never morbid or melancholy, Emily Dickinson lived in its presence. On these two exquisite discs that bring the poet and her poetry back to life, and together with pianist Dawn Clement, Mark Helias on bass, Bobby Previte on drums and Deborah Rush’s voice Jane Ira Bloom seems to do likewise song after song, after song…