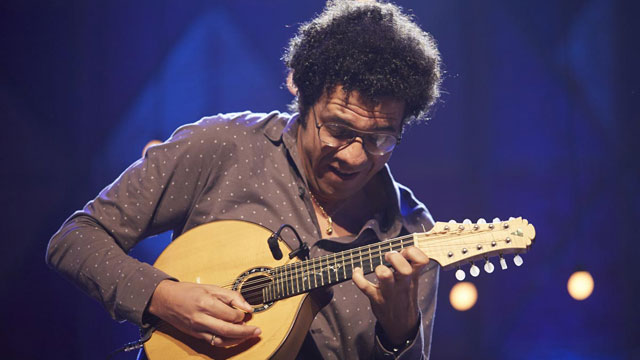 Hamilton de Holanda is quite literally one of a kind. True, there are other mandolin players, and some, like Mike Marshall, David Grisman and Katerina Lichtenberg are truly great, but Hamilton de Holanda is in a rarefied realm, all by himself. Playing his signature 10-string mandolin—Bandolim in Portuguese—Hamilton de Holanda is an artist of unbridled genius. He has single-handedly revolutionised the playing of the instrument, creating a sustain that the instrument never had before, when notes died almost the instant they were played, due to the taut nature of the tuning and, of course, the instrument’s length as well. In the hands of this mandolinist all this takes on a magical turn as notes dally and hang as they resonate and sustain their frequencies and tonal value long after they are played, like that of a note played on the guitar. And now this young master has recorded two whole albums of caprices and each showcases his genius on the mandolin in much the same way that classical composers such as the great Paganini did for his whimsical caprices on the violin. 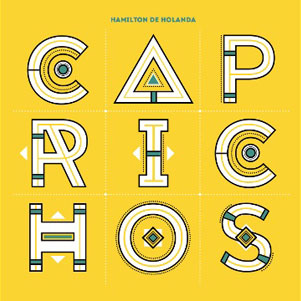 The Caprichos are replete with all of the Hamilton de Holanda virtues—among them, unfailing clarity, innate elegance, an unerring sense of proportion, a finely-honed mastery of style, melodic finesse and an unobtrusive grasp of harmonic rhythm—these are exemplary performances. Stylistically they are very much of t heir time, falling midway between the Jacob do Bandolim ‘revisionist’ tendency of the mid-20th century, repudiating the earlier, essentially miniaturist ‘choro’ tradition and the sometimes rather antiseptic, musicologically—‘enlightened’ approach to the century’s final third. The prevailing tonal palette from mandolinist and his musical partners on this recording, is appropriately lean but always beautifully focussed and elegantly applied. Operatic in the best sense of the word, Hamilton de Holanda is more concerned with dialogue not only between his two hands but within all levels of the texture, that with conventional notions of ‘vocal’ cantabile.

But what finally renders Hamilton de Holanda’s caprices supreme (and I mean loosely, that he never wrote anything but caprices) is not the matchless subtlety and characterisation of the monologue or dialogue, but the continuous development of the characters and relationships between them. There is absolutely nothing to miss here. Even the feeling of development necessarily relies on vivid and varied characterisation in the first place. I feel this throughout, but never more in the “Pixinguinha Caprice” and the “Choro Caprice”, especially in the slower build-up from the beginning, where the de Holandaian tension between harmonically loaded melody and essentially dynamic, often kinetic nature of metre that is gloriously celebrated in the dissonance of symmetry. That said, these slower movements glow with a real sense of poetic sensitivity and here Hamilton de Holanda relishes the caprices’ snappy rhythms. In the “Saint Cecelia Caprice,” the “Rafael Caprice” and the “Brazilian Caprice” for instance there is a decidedly elegiac view of the expansive caprices, offering a performance of mellowness and beauty. Throughout Hamilton de Holanda encourages from his strings in gentle adagios and brisk allegros. These are performances that will delight both aficionados of the mandolin and admirers of Hamilton de Holanda alike.

Virtuosic, brilliant and unique – those are some of the adjectives used to describe this musician who sets world audiences ablaze, while developing a career studded with awards. Hamilton de Holanda has used the past 14 years to establish a technique that has reinvented the playing of the 10 string Mandolin. He has composed 24 Caprices for mandolin and disentangled this emblematic Brazilian instrument from the legacy of some of its influences and styles, to make it a global instrument. In the US, the press soon dubbed him the “Jimi Hendrix of the Bandolim”. Read more…