Gordon Grdina’s music is not only meticulously conceived, but also meticulously arranged, interpreted, and packaged right down to the last detail. Everything serves the music and the man from whom it has been begat. The singularity of everything is eloquently poignant and telling. On his 2020 septet offering Resist for instance the music is presaged by a cover on which there is a reproduction of a painting by Hieronymus Bosch (c. 1450 – 9 August 1516) entitled Christ’s Descent into Hell. Why is this telling? First of all, Bosch, painting depicts the suffering of humanity in Hell, in the glowing and unbridled style of Reformation belief of final damnation. Bosch is one of those painters who are becoming more relevant today not the least because of his ability to capture (among other things) elemental human experience. 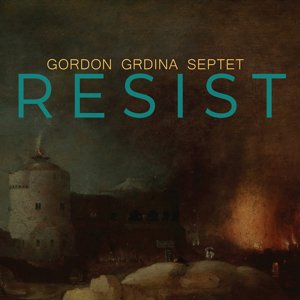 This seems to align the fact that although we seem to have become more anesthetized to the pain of others as a (human) race we have also grown weary of our own pain. Like Bosch depicted in his view of the world, Mr Grdina does in his music. What this composer’s feels is of what you may call “the pain of conscience” and this is what he describes in the repertoire of Resist. It is extraordinary music written and played by him on guitar and oud, it would seem, by the nerve endings of his fingers rather than a sharpened pencil or some other writing device. Like the Bosch painting on the cover of the disc, Grdina’s music is redolent of fiery colour and texture. It certainly seems to evoke the caterwauling of those burning in the hellfire of what seems to be a conscious societal return of Fascism.

This music is not overtly political, but it is visceral as it emerges seemingly from the guts of suffering humanity. Sonic distortion and musical dissonance introduce the main piece – the near-half-hour-long “Resist”, which is an (instrumental) anthem of the dispossessed. Drawing inspiration equally from the intense sonic yelps and screams of the (erstwhile) Jazz Avant-garde movement and (through dyads and triads) subsumed from the Phrygian modes of Middle Eastern (music) Mr Grdina weaves these extraordinary pieces together with the yelping winds of Jon Irabagon and the rattle and hum of Kenton Loewen’s drums and the superb string quartet comprising violinist Jesse Zubot, violist Eyvind Kang, cellist Peggy Lee, bassist Tommy Babin.

Mr Grdina’s view is not completely one of doom and gloom. It seems to also pick up the hopeful cues depicted by Bosch’s work and that means sounding a note of redemption. “Varscona”, a piece depicting the iconic theatre in Edmonton, Alberta is sinewy and pulsates at a relatively breathless pace. Other pieces such as “Seeds” and “Ever Onward” also sound an eminently hopeful note. This music is delightfully sprung and, like the darker pieces, also elegantly shaped. With fizz and verve these pieces jump off the page most gratifyingly with the full complement of driving energy, intimacy, tenderness and bounce. That won’t come as any surprise if you look at this line-up. Sound quality throughout the disc is bright, clear and unusually (for digital music) warm.