Home Music George Freeman & Chico Freeman: All In The Family

To be moved by so little is to show in perfectly appropriate terms the very nature of these pieces, and a rare and special event on any disc – whether live or made in a studio. Both George Freeman’s and Chico Freeman’s phrasing and articulation are so precise yet carefully understated, and of a kind of total-acceptance simplicity, that the music is given space to sing – aided by the every so spectacular Harrison Bankhead and Hamid Drake, and a host of other fine musicians. It’s like being in a constant state of wonder for nearly eighty minutes, without any pomp, but all that it takes to be ever so spectacular. 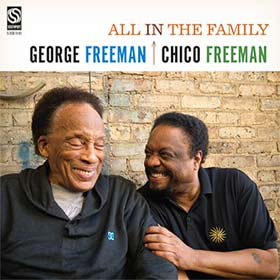 At no point in this dignified performance does either George or Chico Freeman resort to overshadowing one another or over sharing with the listener to make a point. Although each is revered for his musical intensity, it isn’t as obvious here as it may be in other recordings separately of course. This is more in the vein of Miles Davis. Cool, involved and yet detached; even sardonic at times, but always beautiful. One of the qualities best served by their mutual respectful withdrawal from the noisy soul-baring front line of music is that its dance identity is so joyfully evident. The phrases relay into each other like a pair of figure skaters moving from pose to pose; the end of each never experiences a heavy footfall; and the openings of many songs are so graphic that you can almost see the dancers’ bowing to each other before they begin. Cases in point: “Latina Bonita” and “Five Days in May”.

George Freeman is so fleet of foot, even in the slowest of movements, that it is not long before it becomes clear that this performance is a masterclass in restraint and musical altruism. It is no accident that it might feel this way. George Freeman is, after all, family and Chico Freeman always returns the favour, with lines that are sensuously viscous. The musical interpretation for both is almost transparent – nothing disturbing the millpond, save the knowledge that the tranquility of its performance is in inverse proportion to its depth. This is a performance greater than that which would be sparked by empathy. It is transcendent communication from soul to soul from a place that so few go these days that you will miss it when the record is done.

It’s easy to think that the definitive recordings of these pieces could only be these studio versions: ones where every phrase has been scrutinised and, if necessary, retaken. Although it does seem in all honesty, that there is very little of this kind of thing at work here. But at the very least George and Chico Freeman’s living, breathing manifestation of a lifetime of study and playing can do is make the listener reconsider whether the most three-dimensional way to present such profound music is, in fact, prepare in private but then to trust to luck when it all goes down in public.

George Freeman is an American jazz guitarist. He was born on Apr 10, 1927 in Chicago, Illinois. By mid-1947, Freeman was a member of a sextet led by Johnny Griffin and Joe Morris and supporting touring musicians such as Lester Young and Charlie Parker. He recorded with Parker for the Savoy label. In the mid-’50s, he started a long association with organist Richard “Groove” Holmes, appearing as sideman and song contributor on Holmes’ World Pacific and Prestige. After touring with Gene Ammons and Shirley Scott, Freeman decided against any more road work and has been based in Chicago. Read more…

Chico Freeman, the multi-reedman, keyboard artist, composer and producer embodies the intent of jazz by finding new avenues of expression that embrace the heritage and tradition of the music. Many critics have compared him to the greats in jazz history, but the proof, beyond arguable opinion, is in the fact that he has played and recorded with some of the most innovative musicians in the world. Read more…