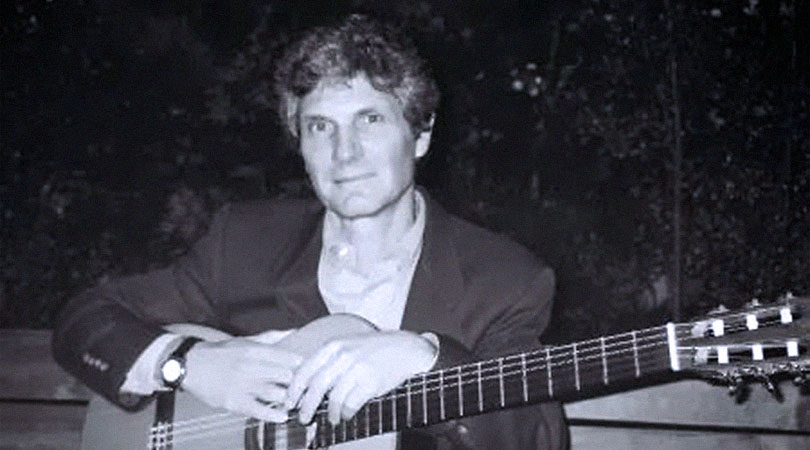 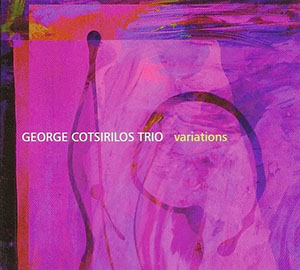 The guitar world is a cluttered one. Yet there is always room for someone good, especially when that person is George Cotsirilos. This is a quiet guitarist, who does not make the noise that many other musicians—lesser mortals, actually—make when they play and release recordings. Sometimes it pays to make a quiet noise. It is possible to focus upon the music as it is on Mr. Cotsirilos’ trio recording, Variations. Moreover, the Bay-area musicians have a reputation of being more laid back; more cool, or cooler to be assiduous for that is where that epithet originated especially with Lee Konitz and Zoot Sims and a slew of others. But back to the guitar. It has always been a cool instrument. Its musicians paint from a blue and green palette. Charlie Christian was a conundrum. He played hot jazz, but with a cool tone; so did Wes Montgomery. So does Pat Metheny and the more forward-thinking instrumentalists. George Cotsirilos is one of those forward-thinking guitarists. He is painfully aware that he is replacing the piano in the role of both melodic and rhythmic instrument. Mr. Cotsirilos’ music is crepuscular; not only are his notes slightly dark, but they are also of a denser viscosity and as a result they dally awhile and roll off the strings more slowly than others.

Mr. Cotsirilos descends from Mr. Montgomery. He has that way of playing fluid single note lines interspersed with voluptuous chords, yet they are not syrupy. His soli are always something to look forward to. The excitement is in trying to guess where he will take off; at which point in the melody. He might, for instance, play a couple of choruses dancing in front and behind the rhythm that is magnificently pulsed by bassist Robb Fisher and drummer Ron Marabuto. Then suddenly at a quite unexpected point, Mr. Cotsirilos will leap off the proverbial ledge and plummet into a sea of blue chords where he picks up the melodic threads somewhere in the middle of a line, introducing a thought or two; then he pursues them in good order in a most creative fashion, opening the doors to each with block chords that function like two-way doors so he can go in and out of them at will. Mr. Cotsirilos is a very inventive guitarist as well. His soli only hint at melody, but he seems to come out of nowhere to enhance the beauty of that melody. Nothing is too far-out for him to enter from. And, best of all his command of dynamic and diction is sublime. And thus the music is always magical.

The dense chord cluster with which Mr. Cotsirilos begins his dolorous chart “Doce Presença” is altogether beautiful. And as he proceeds with the music picking notes in colours dripping with rust and brown, thick dark colours that are daubed onto a canvas begin to form like magic before the eyes. Then as the song develops Mr. Cotsirilos proceeds to make a sharp turn towards Brasil. His music from then on celebrates the masters that have adorned the guitar; from Laurindo Almeida to Sandro Albert they begin to form before the eyes as the notes begin to dance before the eyes, cajoling the body to pick up the rhythm and dance. And then there is “Chimera,” a complex chart that Mr. Cotsirilos handles with almost sensuous aplomb. He paces the song so the rhythm hangs in the air heavily and like a coat of thick paint that he seems to want to paint upon that many-coloured canvas that Mr. Cotsirilos paints. At the end of it all Variations is multi-faceted and George Cotsirilos is like that master cutter bringing each facet to life as if he were cutting a raw and priceless diamond. It glints in the cool of the night air and listeners will be captivated and mesmerised with its beauty.

Originally from Chicago, George Cotsirilos has been a member of the San Francisco Bay Area jazz community for many years, performing with a wide variety of artists, from San Francisco jazz fixtures like Eddie Marshall, Mel Martin, Pharaoh Sanders and Mark Levine to internationally recognized blues singer Etta James, Bill Evans, bassist Chuck Israels, and Soul/Jazz vocalists, The Whispers. In recent years, in addition to working as an accompanist, he was a member of the San Francisco Nighthawks which included drummer Eddie Marshall, Bobby McFerrin pianist Paul Nagel, and former Cal Tjader bassist Robb Fisher. The group recorded for Monarch Records and was featured at the Monterey Jazz Festival.

Cotsirilos graduated from the University of California at Berkeley and studied classical guitar privately through the San Francisco Conservatory of Music.