Home Music The Fred Hersch Trio: Sunday Night At The Vanguard
Few pianists have possessed a more comprehensive, magisterial technique or musical integrity (his early volatility now calming into greater reflection). And here, in Palmetto Records’ Sunday Night at the Vanguard this time of recording a surprisingly recently as March 27th, 2016, you will hear at once those salient characteristics that prompt awe and envy among Hersch’s finest colleagues. First and foremost is what Heinrich Neuhaus called ‘an elemental virtuoso gift’ and a sound ‘rich in noble metal, 20-carat gold that we find in the voices of the great singers’. 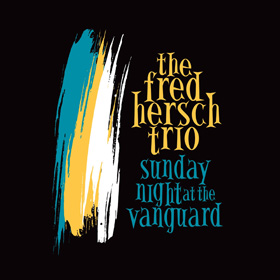 Fred Hersch is both the grandest and most lyric of virtuosos. His music is warm-hearted and romantic in a way current in the 21st century at the time of this recording and his sly wit occasionally rises like a foaming wave and this is wonderfully in evidence on ‘Calligram’, dedicated to the wonderful French pianist Benoit Delbecq. Equally breathtaking are his questing interpretation of Thelonious Monk, which are always exultant and heroic and never without Hersch’s indelible quality. On this particular performance it is ‘We See’ another one of those Monk tunes that we do not often hear. This trio that includes bassist John Hébert and drummer Eric McPherson, both dazzling musicians in their own right, is overwhelming in its pulverising strength and brilliance. Try ‘A Cockeyed Optimist’ or ‘The Peacocks’, or even ‘Everybody’s Song But My Own’, each a display of formidable but effortless virtuosity complemented by seamless exchanges.

Finally Fred Hersch makes music a living, breathing thing in his solo performances. On this occasion he ends his extraordinary performance with ‘Valentine’ a Hersch-original and a heartwarming gift to an adoring audience. This, like all of Hersch’s solo performances is a piece of unsurpassed beauty, crystalline and gem-like. Nothing is more light and dexterous and breathtaking than a Fred Hersch solo piece. What a glorious way to end a perfect recording.

Track List: A Cockeyed Optimist; Serpentine; The Optimum Thing; Calligram; Blackwing Palomino; For No One; Everybody’s Song But My Own; The Peacocks; We See; Solo Encore: Valentine.