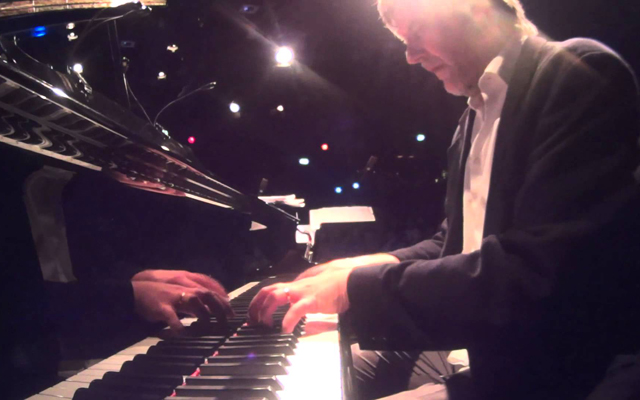 Listening to Frank Carlberg play piano – and you can pick any recording, if you haven’t seen him live – one is immediately struck by the overriding effect of his performance as being one of liberation and inevitability. He a one of the most exciting improvisers, an intellect of the highest order, yet his edict is never chaos instead of music and his great originality is reflected in everything that he does, be it a composition, a performance or his pedagogy regarding Thelonious Monk (See video below). But ultimately it is his pianism that speaks of his brilliant and unfettered mind. He approaches any form of his music confident and uncompromising, often without even scant acknowledgement of its weird and wonderful digressions – his improvisations on themes – transformations and mutations. He makes perfect sense of the senseless.

Carlberg’s magnificent technique makes even the trickiest of passages in his music seem like child’s play. He seems to know exactly where the music is taking him and delights in taking the unsuspecting listener there. But what impresses most about Frank Carlberg is his musicianship. He is able to make the listener aware of the emotional import of each note and each phrase, apparently spontaneously, as though he’s just considered playing it that way. Take the way he plays on Cosmopolitan Greetings, music that he says began with an empty canvas and a few sketches of ideas that he shared with the group. Carlberg is able to find a new tone colour, a different touch of subtle rubato. In his hands the music becomes a living, breathing thing and gives the performance its own individual character.

On his album Word Circus he invents melodies for the words of three modern American poets, principally for vocalastics of his wife, Christine Correa. Handing over the reins of these songs to the vocal element in the music he seems to value character over sheer brilliance, showing a strong feeling for the drama of the phrasing of the poetry. Conversely he embraces the poetry’s playfulness, its occasional moments of lyricism, and metre with a stunning rhythmic attack. But always his playing is in the service of creating the right sound and reactivity for the poet’s unique vision. 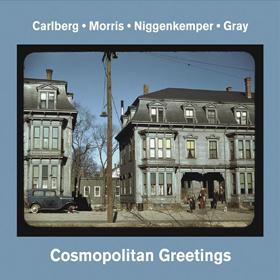 The ear is continually delighted by the series of improvisations on themes suggested by Frank Carlberg to musicians of extraordinary genius who further enrich the music even adding an idea or two of their own when you least expect it. Carlberg’s dizzying arpeggios are matched by the impeccable hisses and sparkles of Luther Gray’s drumming, ruthless growling of Pascal Niggenkemper’s bass and the articulate murmurings of Joe Morris’ guitar. The sheer joy of hearing unfamiliar rhythms in brazen, radical new contexts and orderings – as in the magically expressive ‘Who Eats Who’ – is heightened by the fun of waiting to hear what comes next. Further pleasure comes from the quartet’s playing, an uplifting mixture as ever of ensemble excellence and open generosity of spirit. Each musician’s readings between the lines of the musical ideas and themes is clear and committed. Soli are unpretentious and each soloist harnesses the power of the ensemble to extrapolate in the group-ideas that are built up in passages immediately preceding the solo. As usual Frank Carlberg plays with surging energy avoiding subjective rhetorical attack in favour of a patient brooding quality that allows for exceptionally lucid textures. A vibrant sound also ensues when the other soloists take the reins. With these and excellent ensemble-playing an excellent set ensues.

Track List: Cosmopolitan Greetings; Cadillac Squawk; Now and Forever; Who Eats Who; Research; Get It? 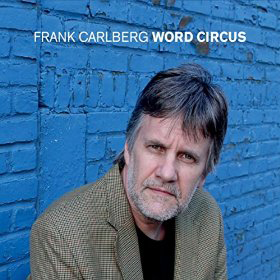 It’s easy to enjoy these immensely characterful works on this album. Each of the poems sung here, by Christine Correa are powerfully staged and the collaboration between vocalist and instrumentalists is exemplary, maintaining and gradually intensifying in momentum. This is, of course, a group effort, which is maintained not only by Frank Carlberg, but also by saxophonist John O’Gallagher, bassist Pascal Niggenkemper and drummer Michael Sarin. Their performances are impressive in the command of musical paragraphs. Through all of the restless brilliance of this music, these artists convey not only virtuosity but a confiding quality too. Like great accompanists for classical Lied, each of the soloists is happy to retire from the spotlight and let Correa play the decorative role. In his compositions on this album Carlberg’s genius is fully evident in the imaginative deployment of music that fits the chopped rhythms of the poetry with breathtaking symmetry. And when Christine Correa applies her vocal skills to each poem the music emerges luminously with a winning flow of melody, the effortlessness of which is strenuously achieved. Try ‘On Some Level’ as a sampler and you will see what I mean.

Track List: You and Me; Even If; On Some Level; Things To Do In An Economic Crisis; Ecology; Stop Telling Me; Lullaby.