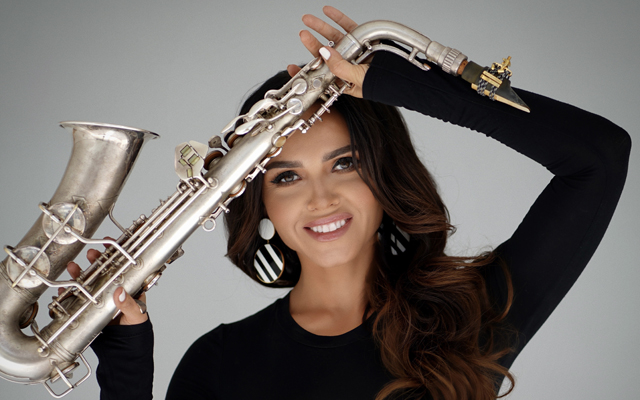 The intense palettes of music and emotion unite in the eloquently funky artistry of the saxophonist and vocalist Elena Maque. Even when she invites us into private worlds in which love, rejection, despair, and hopelessness abound, Miss Maque is able to convey these emotions in striking terms. With a lustrous, feather-light voice and gilt-edged tonal palette with which she plays alto and soprano saxophone she is able to evoke dramatic and psychological atmospheres as if a brooding Bartók or Shostakovich were looking over her shoulder. And yet there is an airy manner about her artistry that prevents listeners from drowning in sentimentality. 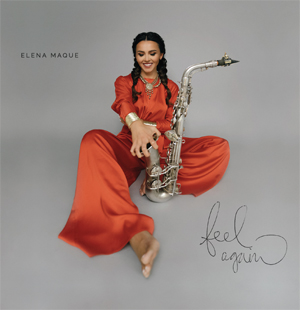 Songs such as “Lover Man” are ideally suited to her and her original “Feel Again” pays the heartfelt emotion of Billie Holiday’s song forward. In both these songs as well as in other songs such as “Weightless” she is able to plumb the depths of feeling. This kind of musical poetry is second nature to her. Even in the somewhat bouncy tempo of “Chance” she is able to somehow make her dark-hues felt in a powerful way not only in the way she vocalises the lyric, but in the tone of her playing as well. David Lange’s accordion adds a kind of romantic Parisian aire to the song that is most affecting. Furthermore, as a vocalist she is utterly convincing and romantically fresh in her [flawlessly-sung Portuguese] vocal for Tom Jobim’s “The Girl from Ipanema”.

Miss Maque has assembled a spectacular cast of musicians – from pianist and music producer Scott Kinsey and the inimitable bassist Hadrien Feraud, as well as drummer Gary Novak, who is more like a percussion colourist than a player of a conventional drum set. The guitarist Leonardo Amuedo is spectacular throughout. There are many more superb musicians who bring matchless skill and idiomatic playing to this recording [all of whom are listed below].

This is an uniformly brilliant album, thus it’s hard to pick a standout song. However, the beautiful surprise may be palpably felt on the album’s apogee, and that song just might be the exquisite interpretation of the Beatles’ “And I Love Her”. However, even without that song this would still be an album to die for…