The decade of the 1930’s heralded the golden age of Afro-Brasilian studies. Scholars from diverse disciplines – anthropology, sociology, history, psychiatry, linguistics, folklore and others – came together to study, and therefore celebrate, Afro-Brasilian culture. Among its many celebrated champions was Mário de Andrade, who created the Discoteca Pública Municipal de São Paulo in 1935. The mission was to create a national archive for the folk and popular music of Brasil. Moreover, it would become a springboard from which other scholars would launch new and more ambitious campaigns to further the studies of Afro-Brasilian music and culture. One such person was Oneyda Alvarenga, a poet and musicologist, and student of de Andrade. She ran the Discoteca for 35 years. During this time it commissioned Carmago Guarnieri to undertake musical studies in Salvador. In the 1940’s Oneyda Alvarenga also cooperated with L.H. Côrrea de Azevedo. Others also contributed to the Discoteca’s impressive catalogue of materials – recordings, films and photographs. That work continues although commercialism and other factors have interrupted the work of a dwindling number of scholars’ whose work has not received the recognition outside – perhaps even inside – Brasil. 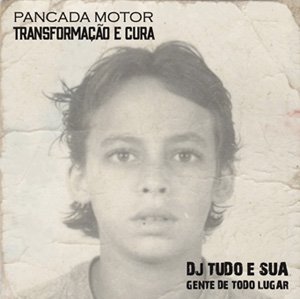 DJ Tudo – his “DJ” moniker perhaps suggests a more “popular” than serious status – may seem to have ploughed a lonely furrow in the state of Alagoas, pushed up into Pernambuco by the state of Sergipe, in the northeast of Brasil. But the facts show otherwise. On his 11th album Pancada Motor – Transformação e Cura DJ Tudo e Sua Gente de Todo Lugar have not only enriched the old but living archive of Afro-Brasilian music, but also shown it to be a part of the wider artistic palimpsest of humanity. With these nine works, DJ Tudo has maintained the musical centre of gravity in Afro-Brasilian culture, while showing its relevance in the infinite musical universe outside the borders of his country.

As a result we become part of an odyssey that may be little over half an hour in duration. But the sweep of its musical topography is epic in nature and the echoes of this music will reverberate – and certainly resonate – long before the last notes of the last bars of “Giro Cura” have died down. And what a wondrous experience it is to be a part of this Afro-Brasilian listening room which feels as if it is at the heart of the earth’s sheltering sky. DJ Tudo’s worldview is rich and layered in the melodic content of this music – all of which is sung. But more important through it all is its harmonic and rhythmic conception. And while the Afro-Brasilian heritage is at the heart of all of the music, there is also a metaphorical aspect to his the “Afro-Brasilianness” of the music here and it is this: the roots in Africa have resulted in the growth of a tree is whose elemental shade all music resonates.

This is how we begin with his recording – with an elemental earthly birth or “Nascimento” after which we traverse a cultural topography that covers the indigenous migrations that took humanity and its universal celebration in song through Asia, Australasia, Europe – through the Indo-European “Rabari” communities via the exuberant music of “Transformação”. Back and forth we go with the music, echoed in the music of “Eu Sou Africano – Escravidão” [a recreation of the dance of African slaves], and through the Balkans before we hear echoes of humanity’s unfettered ebullient expression in “Nietzsche Era Triste Porque Nunca Foi Numa Macumba – Celebração” with its fascinating existentialist [and melancholic] philosophical references to Nietzsche.

The music of Pancada Motor – Transformação e Cura may be rooted in profundity, but its fundamental expression is one of gaiety and freedom – the exposition of the theme that has driven man no matter what his persuasion into the arms of the universal pied piper – in this case DJ Tudo e Sua Gente de Todo Lugar – who leads us to what is easily a place where we become the better shepherds of the earth that bore us first in Africa and then – as DJ Tudo says in “Todo Lugar” on earth.