There are few [if at all] contrabass virtuosi as eloquent of voice and musicianship playing today as David Finck. Notes of songs leap off the page and pirouette in gravity-defying ballet moves, soaring upwards In the soft yet firm pizzicato of his fingerwork and his playing is so technically proficient con arco that you might say his touch is symphonic. Naturally this has made Mr Finck much in demand by such exacting musicians as Michel Legrand and Paquito D’Rivera. However, nowhere does My Finck display the full array of his musicianship than on his solo albums. 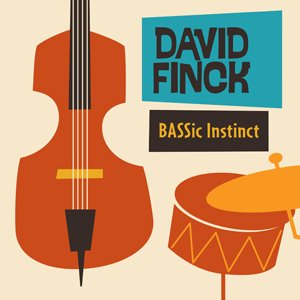 BASSic Instinct is a follow-up to his 2019 wonder-work BASSically Jazz. Listening to this work one might exclaim that it is utterly beautiful from its themes and the exquisite art with which the music and its media are identified. Mr Finck is masterful throughout the repertoire, his articulation rumbles with uncommon gravitas and is sculpted in largeness of design, in the thrust and parry of his attack. There is monumental mastery in the manner in which he changes from swing to shuffling modes, bobbing and weaving through the idiosyncratic harmonic and rhythmic conceptions that define the Brasilian and other Latin-American repertoire and the straight ahead modal arrangements, each played with uncommon sensitivity.

The imaginatively-selected repertoire combines exquisitely-crafted arrangements of beguiling variety and seduction comprised of well-known standards as well as a few David Finck originals. It is the delicacy of the writing [composition and arrangements] and the sonorities that is so winning [to my ears anyway]and which [I believe] raises the creative quality of this performance to a rarefied realm. Each song is luminously scored, with a winning flow of melody, the effortlessness of which is strenuously achieved in every department – brass, woodwinds and rhythm sections [when employed in the more lusciously-scored works for larger ensemble].

Melody, harmony and rhythm form near-unbroken lines of music intertwining as if one is seduced by the other in a musical ménage à trois that is rarely heard [unless gratuitously post-produced]. This is heard in the mellifluously sensitive minutiae “Soon It’s Gonna Rain” as well as in the expansive inventions of “Dearly Beloved” and the gorgeously-sculpted variations of “So What”. The apogee – if I could risk singling a song from out of this repertoire for special mention] might be the performance of Mr Finck’s original “I Remember” with its achingly beautiful vocal by Melissa Errico, spare – almost mystical playing of Tedd Firth’s piano and because of the almost desolate beauty of Mr Finck’s performance con arco.

The superb recording of each of the instruments – not only of Mr Finck’s bass, but also – especially of the piano and guitar – makes this music all the more compelling. Certainly an album to die for from one of the premier bassists of our time.