I have, long ago, empathised with the emotional relationship of the bassist and his instrument. In fact I myself have fallen love with the instrument – with its bass-specific tone colour and mighty five-octave range; with the idea that contained within the bass is a blueprint for all other string instruments. I have listened in awe as Jimmy Blanton made the bass front and centre of Duke Ellington’s orchestra, jumped out of my skin when Oscar Pettiford played, followed the dizzying heights of Ray Brown’s melodic soli, been struck speechless by Charles Mingus (for other reasons as well) and have since fallen prey to the charms of Charlie Haden and Cameron Brown, Harvie S… Avishai Cohen and… 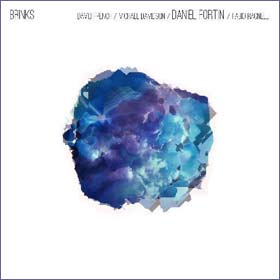 And it’s no coincidence that I have also fallen for Brinks and the group that has made this record, led by the sublimely talented bassist Daniel Fortin. Mr. Fortin’s recital disc works best when resonating in sympathy with the instrument’s tonal grain and registral colours. The bassist has the technical facility like few bassists have. You do not hear much of his arco playing, on Brinks but pound-for-pound Dan Fortin is the finest pizzicato player among bassists of his generation in Canada. He favours colours that are dark, almost sinister with notes and lines seeming to tell stories that are forbidden. He makes his bass roar like a beast. And sometimes probably by lowering his E-string a semitone he harvests the resulting frequency overtones and here Mr. Fortin and instrument is as one.

Of course Daniel Fortin is never alone. In fact I cannot remember a solo throughout the album. He has, however, surrounded himself with players who play a magnificent supporting role. The vibraphonist, Michael Davidson and David French seem to read the innards of his music well, as does drummer Fabio Ragnelli. Each of the supporting cast play with a physical commitment that transforms their instruments into tuned resonating chambers. Dan Fortin’s music is kept unsullied and dangerous. In writing as he does the bassist allows his fellow musicians to breathe deep – as deeply as he does – in a manner of speaking. This allows Mr. Fortin to explore the full topography of his instrument.

However there are moments on the record – few and far between, that is, when some of the music’s more lyrical contours are allowed to break the spell of harder edged music. At times like these it might be possible to also caress notes and play lines that arc through the air like a series of parabolas. These softer moments are rarely allowed to get out of control, so that the playing is never mushily sensuous. There is real machismo in the music and this is equally true of the highly impressionistic “Verona” as we’ll as in the brevity of “Mince”.

This music could not have been easy to record but Sam Ibbett the engineer of note on this session has brought off a near miraculous sound, especially to the bass. Whatever he has done is as close to making the music resonate in the body of the bass giving it a rich and woody sound. You don’t hear such expertise on recordings these days; not even on the much vaunted bass-direct that is used on the recordings for Wynton Marsalis.

Track List: Verona; Ends; I Don’t Know; Flecks; So As To; Smithereen; ADLDMBDLD; Mince; Progress Bar; But Still And Yet.

Peterborough, ON native Daniel Fortin is one of Canada’s most in demand bassists. His eclectic tastes and stylistic flexibility have led to work with a wide variety of artists in the jazz, rock and pop worlds, including Serena Ryder, David Occhipinti, Florian Hofner, July Talk, Devon Sproule, Matt Wilson, Alex Goodman, Dave Restivo, Harley Card, and many others. Read more…