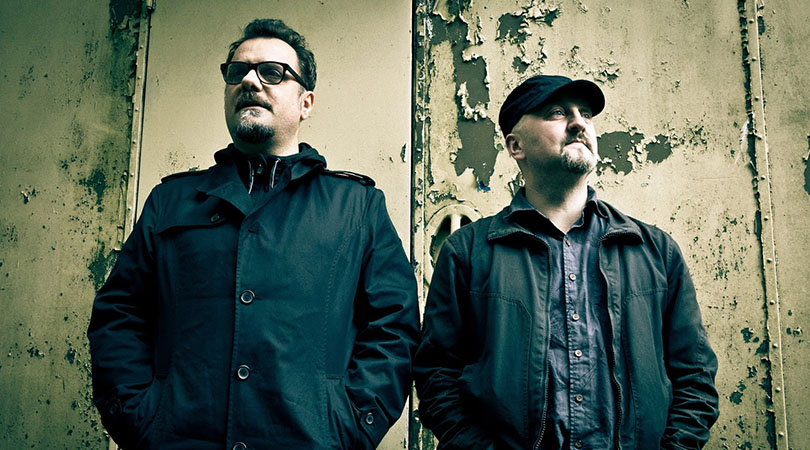 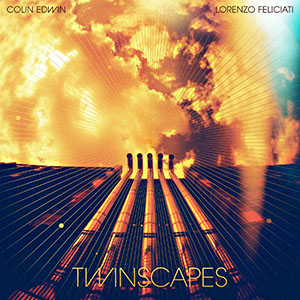 Where does the sky meet the sea? “Infinity,” used to be the right answer before it was proven, mathematically, that, like parallel lines, they never did meet, even at infinity. But rather, like there two bass players, playing ad infinitum, they create two separate tapestries that, when progressing seamlessly, they seem to go on forever. That is precisely why the title Twinscapes makes the most sense when attempting to describe the journey undertaken by the two growling bassists, Colin Edwin and Lorenzo Feliciati. The most wondrous aspect of this music is that each bassist creates both warp and weft in his diaphanous fabric and also journeys as warp and weft in each other’s tapestry as well. This tantalising give-and-take makes even the most rudimentary rumbling of voices in the depths of the low frequency range sound breathtaking to the inner ear, for that is where the most exciting sounds are heard and felt like a swinging roundhouse into the gut.

The music is, indeed, entirely physical and each robust hammer on the strings of the bass—fretless or fretted—goes straight to that place in the diaphragm where lungs and guts intersect. Somehow, it does not really matter who plays what (fretless or fretted) and when these melodic inventions unfold. The fact that Mr. Edwin’s and Mr. Feliciati’s souls collide is enough to produce a darkly swirling soundscape that metamorphoses into such elementally wondrous fabrics as endless as sky and sea. Their basses do not just intertwine with one another but also enter the primordial howl of Nils Petter-Molvaer’s horn and when they do the basses raise their own frequencies alternatively seeming to yowl in counterpoint; dancing interminably in raucous homage to the horn’s moon that seems to illuminate both sky and sea. Thus is noted the spread-eagled and flayed playing of basses and horn in “Sparse,” one of the most beguiling and beautiful tracks on the recording.

The chemistry that exists between these two bassists is infectious. It also draws percussionists Andi Pupato and Roberto Gualdi into their realm and with the raw nature of each invitation both men respond with superb playing; of percussive sounds whether metallic or otherwise. This is clearly the case when Mr. Pupato rattles on his gongs and on the cajón—the tattoos of both becoming the glue that binds the basses on “Yūgen” and a short time later on “Solos” as well. And then there is that seemingly fleeting series of moments when the elemental cry of the basses seems to finally intertwine in a unified sort of double helix invented and facilitated by the woodwinds of David Jackson the quirkiest of compositions, entitled “i-Dea.” This chart might seem as if the elements are melting into one soundscape, but the moments are fleeting as the basses separate once again, to return to the woven splendour of their own tapestries.

It seems from this and other music produced on the RareNoise label that the Brits and Europeans are going where few musicians dare to go and if this sounds like a facetious statement even a cursory listen of music from this label might prove the case in the manner that the music of 1950s-1960s New York once did.

Lorenzo Feliciati and Colin Edwin first got together for an impromptu one-off gig in London early in 2013, and they discovered an instant chemistry on the bandstand.

As Colin recalls, “I was familiar with Lorenzo’s band Naked Truth and also his solo album Frequent Flyer, and coincidentally had been toying with the idea of a dual-bass project with a bass player friend of mine. So I immediately thought it was something worth doing as an experiment, at least. And I knew that this project would lead us to explore other things you tend to do a lot less of in a regular band set-up, like using different effects, E-bows, have the bass playing melodies and so forth.”

“It’s such a cliche that some musicians only think about their own parts and miss the overall sonic tapestry of what they are working on, so they tend to overplay,” he continues “but Lorenzo and I have both had a lot of experience playing songs and composed music in ensemble situations, so we both have a good sense of how things fit together.

“Of all the instruments in a group situation, the bass often has more power and is more effective when played in a simple and economic way. And there’s a real art to being simple and complementary.”

In preparing for their session together, they spent a few productive days in a studio in the English countryside (YellowfishStudios), fleshing out compositions from the bones of each other’s sketches. Playing both fretted and fretless basses, the two kindred low-end spirits create a formidable undercurrent on the 11 powerful tracks from Twinscapes while embellishing the open-ended pieces with freewheeling improvisation. “We had a very short time to plan what to do and only a small amount of rehearsal,” continues Colin, “but even from our brief rehearsal, it certainly felt like we had a natural way of playing together. Without any real discussion we managed to find a way of fitting around each other, despite occupying the same frequency area. It requires a certain amount of intuition and sensitivity just to be able to do that, without stepping on each others toes and filling up the same space.”