Anyone who decides to make the alto saxophone his or her instrument of choice in this day and age must de rigueur contend with the fact that in the greater scheme of things – in the music continuum, so to speak – he or she comes after the monumental achievements of Charlie “Bird” Parker. No one is exempt from such fear and trembling; from such existential dread. The challenge to make a mark must surely be that much harder. Bird made such an elemental sound that it is still hard for anyone to make a sound without echoing [at least some of] Bird’s voice. 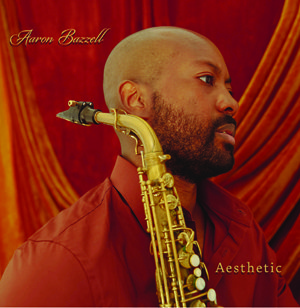 This is why anyone who is able to express him with such eloquence and facility as Aaron Bazzell has to be highly commended. For not only was up for the challenge so early in his life as an artist, but that he plays with such extraordinary mastery of the instrument. His repertoire on Aesthetic volumes toward his uncommon maturity of his musicianship. Mr Bazzell has a throaty roar, unusual for an altoist. It is also a world apart from the haunting, silvery tone that Bird whips out of his horn. And while everyone has his [or her] own way of negotiating the omnipresent ghost of Bird, Mr Bazzell seems to have come to a point of departure very early in life. [I know many musicians who even avoid listening to Bird until a much later stage in their lives].

Mr Bazzell is to be hugely admired for his singular tonal palette as well as for his harmonic and rhythmic strengths. Truly impossible standard in both musical departments were set by Bird. Mr Bazzell appears to have worked [or, maybe not] to free himself from Bird’s dazzling structures. I’m fairly sure this is the reason for his having to write his own work. He infuses these with vivacious and deliciously characterised harmonies and rhythms. The youthful alto player fuses his brilliant technique with a genuine feeling for a Jazz language evoked with a deep sense of traditional syncopation, bluesy inflections, and improvisational techniques that are utterly singular; with very personal gestures and a soulful inner voicing.

As a composer Mr Bazzell shows himself to be just as well-read in music as he is in literature; and very worldly-wise too. “Maktub” is a profoundly beautiful example of this ability to live in both forms of the art. The word itself comes from the Arabic meaning for it is written and takes its inspiration from the book by the celebrated Brasilian writer Paulo Coelho. “Increase and Persist” is another tosses off expressive passagework dedicated to the uplifting and exuberant glorification of the African Diaspora. These are but two examples of the fine work that appears conceptually on paper, while ascending into a rarefied realm in the fine performances on this disc.

Of course you really cannot do anything wrong if you invite pianist Keith Brown, contrabassist bassist Jonathan Michel, drummer Brandon Donald and the ineffably beautiful vocalist Rachel Robinson [who’s heavenly vocalastics appear on the eloquent and wistful “Eventually”] along for the ride. An album to absolutely die for…