You’re hardly likely to find a group of musicians – no matter how large or small – that better embodies their name, which is 1032K. Nor will you likely find a more appropriate title than Law of Vibration for an album of music by the trio, which is augmented by the legendary trombonist Roswell Rudd, who – sadly – recently succumbed to cancer. The trio certainly lives up to its name (and the strategically created positioning statement placed discreetly on the back of the CD package. “When matter ends, only energy remains” it proclaims for those who might not get the significance of it all, which is the temperature (rated in Kelvin) at which matter ceases to exist; hence the name 1032K. 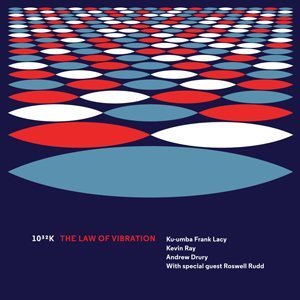 For almost a quarter of an hour the listener is treated to what happens when the musicians light up and create the enormous and exuberant heat on their instruments – Ku-umba Frank Lacy from expelling superheated air from the lungs through the moaning and growling trombone and flumpet (a hybrid brass horn instrument pitch of B♭ that shares the construction and timbre qualities of a trumpet and flugelhorn), augmenting both with thundering percussion colours when called for, Kevin Ray, who takes the rumbling gravitas of his pizzicato harmonic technique to another, proverbial quantum theoretical level and Andrew Drury who suggests likewise with a wall of sound in the realm of the drums.

The music created as a result of this vivid interaction of instruments slides in vibrating layers of sound – musical strata, so to speak – whose shifting relationships evoke the massive forces that shape the very raison d’être of the ensemble itself. Sometimes the strata stack up immensely – as they so especially when Roswell Rudd brings his unique human smears created on the trombone to join in the musical vortex on “Yankee No-How”; at other moments, the (strata) thin to the diaphanous textures as in Mr Lacy’s remarkable piece “All the While… Forgiveness”. Always, however, there is the sense of returning to the same extreme point of blue-hot energy. After all of this one only to discover that the view has changed (perhaps only just) in the interim. Consider the transcendent feeling and emotions that ensue between that work and the performance of John Coltrane’s “Living Space”.

On top of all of this seismic music, the musicians of 1032K create a virtuoso chamber superstructure whose riotous details suggest the teeming surface life of the humanity of earth in all its protean variety.