These volumes display every one of those facets of Mr Cole’s art. Most of all we hear, in these songs, a pianist whose playing and short soli sound as if they were sound as if they were conceived in the space between the piano and the saxophone or trumpet. While his harmonic conception was of the piano, his melodic expression belies the fact that his music attained a rounded sound, moulded as if by the contours of hornlike phrases. In song after song Mr Cole shapes songs together with guitarist Oscar Moore and bassists Eddie Cole (his brother), Wesley Prince and others Mr Cole has created and crafted a singular musical sound grows out of Mr Hines’ music but then relocates it in an unique trio setting, which became the signature sound of The Nat Cole Trio. This school of music by Mr Cole leads, together with that of Mary Lou Williams and Teddy Wilson – and most importantly Bud Powell – helped shape the sound of scores of contemporary pianists who came after them. Songs such as “Riffin’ at the Bar-B-Q” and “Riffin’ in F Minor” are classic examples of this. 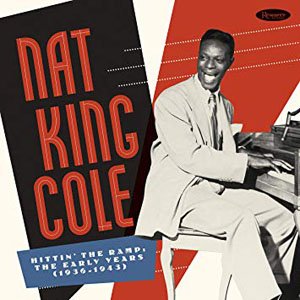 Mr Cole’s music with Oscar Moore and Wesley Prince clearly establishes his sound as that which comes from a small swing combo. In fact, it goes a long way to perfecting the art of swing in that trio setting. Through song after song on disc after disc, we hear something that began with bassist John Kirby small swing ensembles: the extravagant sound of big swing bands condensed to smaller ones with equally visceral energy and intensity. Songs such as “Jivin’ with Notes” and “Jumpin’ With The Mop” show how Mr Cole – together with Mr Moore and Mr Prince – made music swing in every sense of the term in the trio setting. Its precise ensemble playing, melodic finesse and chamber-musical brilliance anticipated many developments that did not become widespread in music until decades later.

In fact, with the Nat King Cole Trio begins the real “integration” line of small-band (even trio-band) history that leads through the Art Tatum Trio and the Red Norvo Trio to the great small bands that followed some twenty years after them. Ensembles such as The Modern Jazz Quartet (“Two Against One”, with Mr Cole on celeste is a foreshadowing of the sound that John Lewis and Milt Jackson would build on. The Jimmy Giuffre Trio(s), the Gerry Mulligan Quartet, The Horace Silver Quintet and scores of others were certainly inspired by the harmonic conceptions of The Nat King Cole Trios of that era. You only have to listen to the instrumental interaction – often with its contrapuntal arrangements – of The Nat King Cole Trio playing songs such as “Liebestrum” and “Snug as a Bug in a Rug” to draw a more or less straight musical line from here to Oscar Peterson’s trios; even to the small groups of Charles Mingus, Ornette Coleman and the organ trios that populate music today.

At one time music was dominated by the harmonic and rhythmic structures of Charlie Parker’s invention that the world came to know as Bebop. Virtually every musician – certainly every horn player – came under his spell. But every now and then a musician tried to break out. Musical voices such as Lennie Tristano as well as Tadd Dameron explored other avenues. The concept of overall “sound” as a structuring musical element certainly came into being. But listening to some of this music – especially the music such as “Crazy Rhythm” with its harmonised vocalastics – suggests that the kind of sound integration that was instrumentally established by such groups as Miles Davis’ Nonet grew out of something that was first perfected by The Nat King Cole Trio (and the small bands of John Kirby).

This set also includes fascinating material in which The Nat King Cole Trio works with Lester Young and Dexter Gordon. The recordings with Lester Young were produced by Norman Granz and also include the great bassist Red Callender, onetime teacher of Charles Mingus. The Lester Young set was recorded in Hollywood on July 15, 1942 and includes magnificent versions of “I Can’t Get Started” and “Body and Soul”. The ones with Dexter Gordon also were also produced by Mr Granz and include Harry “Sweets” Edison on trumpet. This set includes a song that was to become one of the most famous song ever sung and recorded by Mr Cole – and that song is an instrumental version of “Sweet Lorraine”, performed here with The Trio and Mr Gordon and Mr Edison in the summer of 143 in Los Angeles.

Finally we came face to face with the vocal style of Nat King Cole that shaped his late, monumentally popular, career as a singer. His expresivo grew out of the stride and swing forms of music. In Mr Cole’s singing, rhythm and emotion is one and the same thing. The smoothness of his voice and the swinging brilliance of his lines have influenced generations of vocalists from Ray Charles to Stevie Wonder and – perhaps most significantly – Miles Davis. In fact Mr Davis once said that he learned about phrasing from listening to vocalists such as Nat King Cole and Frank Sinatra. The latter claim by Mr Davis might easily have been echoed by most of the musicians who came after Mr Cole. Certainly his vocals were the leaping off point for generations of instrumental musicians who seem almost beguiled into shaping their instrumental voices into something that was at the heart of the singing voices of such giants as Nat King Cole.