Despite all efforts to ‘educate’ the latest generation of musicians, even the finest institutions and most well-meaning instructors cannot prevent memories from dying young, some tragically without ever acknowledging a debt to The Blues and to its greatest practitioners, those who form the family tree of our musical ancestors.

One of the greatest of all ancestors is Bessie Smith, whose short life (April 15, 1894 to September 26, 1937), and even shorter recording career (February 15, 1923 to November 24, 1933), produced some of the greatest Blues recordings ever made. Miss Smith’s career as a musician and performer was a lot longer than the decade between her first and last recordings. She was the most famous musician of her day, drew large crowds and made a lot of money. Both of these aspects of her career were only interrupted by The Great Depression which began with the Wall Street crash of 1929, but she recovered faster than most even from that economic nightmare. 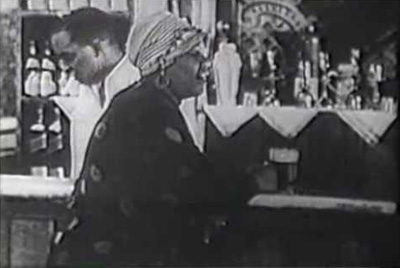 During the early part of Bessie Smith’s illustrious recording career many giants of Jazz also received the starts to their careers, one of whom was Louis Armstrong, who made several iconic recordings with her in the Columbia Studios. Others who recorded with Miss Smith and gained fame during the birth of Jazz included Fletcher Henderson and James P. Johnson. Miss Smith’s entire recorded output has been preserved thanks in large part to the writer, broadcaster and producer, Chris Albertson, who also penned his great biography, Bessie in 1972 (and later updated it in 2003).

Unfortunately, at least two generations of aficionados of The Blues and Jazz never ever saw Bessie Smith perform in the riveting shows that made her one of the greatest American superstars that ever walked the earth. None was documented on film and reviews are mostly so poorly written that they needn’t have been written at all. One performance was, however, preserved on film. It almost did not make it to the future. This is a seventeen minute short feature, St. Louis Blues. It is a film based on the classic Blues song that was written by W. C. Handy.

In fact, Miss Smith was cast in the lead at Mr Handy’s insistence. The film was directed in 1929 by Dudley Murphy and shot in Astoria, Queens, she sings the title song accompanied by members of Fletcher Henderson’s orchestra, the Hall Johnson Choir, the pianist James P. Johnson and a string section—a musical environment radically different from that of any of her recordings. The film almost didn’t survive when, according to Chris Albertson, “In 1950, a group of white liberals petitioned the NCAAP to buy and destroy the only surviving print of the film that turned up in Mexico in 1940. 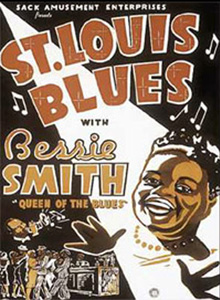 “Taking understandable offense to the film’s stereotypical portrayal of dice-shooting, eye-popping blacks, (as also seen in the grotesque poster to promote the film pictured here) they lost sight of the fact that the film industry had a long history of stereotyping virtually every ethnic group – St Louis Blues – was but a drop in a celluloid ocean of prejudice. Most astonishing is that the protesters failed to consider the historical value of this seventeen-minute film, which represents the only footage of one of the greatest performers America has produced.

“Without St Louis Blues, Bessie Smith’s body movements and animated facial expressions would have died with the memories of people who saw her in live performance, and we would all have been the poorer,” Mr Albertson continues. Indeed this is what anyone watching the film and experiencing the mythic power of Bessie Smith will also conclude.