Kobe Van Cauwenberghe: Interpreting the Ghost Trance Music of the intrepid Anthony Braxton The eminent guitarist Kobe Van Cauwenberghe is spending some of his most productive years as a musician by diving body and soul into the music of the most intrepid composers of our time: Anthony Braxton. The guitarist beckons us to dive into the prescient world of the multi-instrumentalist and prolific composer who has systematically redefined the geo-politics and poetics of music. Mr Braxton may not actually see himself as a revolutionary figure in music but everything about his life and work seems to point in that direction.

Mr Braxton is nothing if not what the human being was created to be – which is a free-thinker. In the world of this humanity he is a lightning rod for what every believer knows to be celestially inspired music then those musicians playing his “compositions” are deemed to be free to interpret the space between silence and sound – where the musical intervals spring forth to produce music in its purest human form. Mr Braxton’s unique compositional imprint – and the works that ensue – has a wonderfully evocative name: he calls it Ghost Trance Music.

Anthony Braxton first came to the attention of listeners and musicologists through the Chicago-based collective Association for the Advancement of Creative Musicians [AACM] to which he contributed original compositions and his own virtuoso musicianship on a myriad of woodwind instruments. Not long after he grew to eminence as an intrepid composer whose life’s work is culled from the sound – every sound and sound-bite and black newsprint buzzing noisily to break the silence of the black page of newsprint – turning the whole experience into the notation of the music he puts down on staved paper; in sum a composer who lives life large and fully and existentially present in the world.

In this world Mr Braxton resides as an unfettered genius delves into everything from the mathematics of chess to the shapes that are landscaped into the universe around him – mountains, buildings [especially the interminable graphics of the urban landscape that house auditoria, recording studios, classrooms and museums] and the people who live and breathe like him. But unlike everyone who breathes Mr Braxton turns the freedom to live and breathe into musical adventures that he invites us to undertake with him. And not simply to undertake but to experience everything concrete and abstract by aligning ourselves with him [whether he is performing or conducting] and the musicians who beckon us on his musical adventures.

To experience the shape, colour and timbre of sound that he [Mr Braxton] has heard and subsequently committed to paper. Is the ride an easy one? Not if you do not give yourself – musician or listener – completely to Mr Braxton’s music. In this regard Kobe Van Cauwenberghe wants you to listen to an interpretation of Mr Braxton’s provocative work – the key being “an interpretation” as Mr Braxton’s shape-shifting, chameleonic music, is crafted to never be the same as it is driven by the fact that while it is guided by the composer’s suggestion of musical form and gesture, each performance is but an interpretation.

Furthermore to understand and interpret Mr Braxton’s music one has to be – as its composer is – a student not only of music but a student of life, mindful of the very breath of both music and life. Ghost Trance Music is a proverbial echo-chamber in which this breath – its melody, harmony and rhythm; its very sounds and silences – re-forms into music. This is both ancient and utterly and radically contemporary. Mr Braxton has always posited that tradition is a wonderful reality. But not understanding that the inner dynamic of tradition is always to innovate is a prison. In questioning the stultifying tenets of tradition he began by creating what he called “event spaces”.

Ghost Trance Music arose partly out of this musical free-agency but more specifically – in the 1990’s when Mr Braxton was inspired by the ritual circle [or ghost] dances with which displaced Native American communities reclaimed primacy with their ancestors. Predictably, this concept for a prescient echo in Mr Braxton’s own “black consciousness”, which was soon extrapolated to encompass the composer’s justifiable belief that we are all nothing if not made from one human continuum engaging in an expression of art that accrues – similarly – from a continuum to which all art, and all artists belongs.

Being, by nature, a music that dwells in the groundswell of freedom to interpret Mr Braxton’s music has thrived by actively throwing overboard melodic, structural and harmonic hooks that have become expressively blunted through overuse. Thus his music has always striven to build from what might – or might not – be left. This instinctive radicalism may have made Mr Braxton a source of endless controversy among refusniks and naysayers who lamented the fact that Mr Braxton’s music may have shredded sublime gestures – say from Louis Armstrong to Wolfgang Amadeus Mozart for instance – into agitatedly ticking rhythms, or seemingly volatile white noise and “absurdist” theatrics by interpreting musicians.

But beneath it all is Mr Braxton’s music – especially the epic continuum of his Ghost Trance Music – has a rare kind of beauty all its own which eschews the overly-perfumed, audience-ingratiating kind of beauty typical of commercially-acceptable music. It is this music that Mr Van Cauwenberghe introduces us to – replete with its free association and freedom to interpret and build upon into a predestined architectural marvel.

Mr Van Cauwenberghe has always been a proverbial outward-bound musician. In a sense his artistic orbit begins with in the periphery of the musical circle and is propelled by a centrifugal [rather than a centripetal] force, which accounts for his gravitation towards in the outer extremities of music’s continuum. Graduating from the conservatory in Ghent and the music of Robert Fripp and Brian Eno, the guitarist pursued advanced studies in the US where – no doubt – his interest in Mr Braxton’s universe inexorably beckoned. Thus he was fired up enough to write a doctoral thesis in Mr Braxton’s Ghost Trance Music. 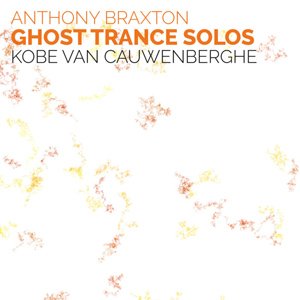 Kobe Van Cauwenberghe: Ghost Trance Solos Discussing Mr Braxton’s music often feels like a pedagogical exercise. All the better, then, to dive into its universe with a holistic mind-set. This is exactly what Mr Van Cauwenberghe does on his solo outing, playing three of Mr Braxton’s compositions.

Theoretically perhaps Mr Braxton’s compositions could follow one another in random order as the interpreting artist could offer a musical leap off from one – and runway for landing onto the other. But Mr Braxton’s own compositional chronology may [or may not] suggest a directional order where one composition leads inexorably into to another – perhaps where the first left off.

At any rate Mr Van Cauwenberghe has arranged the compositions in chronological order beginning with Composition No. 255, following it up with Composition No 284 and then ending the session with Composition No 358. The vocalastics – with which the guitarist accompanies this performance – throws the music into a spiral by enunciating randomly accessed numbers as if his singing was turning a sort of [computer] binary or tertiary code into music.

This falls exactly into the delightfully chaotic [seemingly so] musical playfield in which Mr Braxton’s art is propelled. Here the music gives form to the unique cultural topography completely and uniquely of Mr Braxton’s making. Here a circle fits snugly into a square and each of the aforementioned also fit just as well into a triangle. How does this happen?

The seemingly randomly-sung numbers make it possible. Mr Braxton’s music has an authentic beauty all its own; but it is a beauty evocative of Geräusch [meaning noise, but a sense of natural noise like wind blowing or trees rustling. This is entirely possible in the Native American Communal Circle – as in Mr Braxton’s own fecund mind, where the Ghost Trance Music evolves. Single guitar – jagged, or smooth – lines intertwine sometimes with other guitars, electronics and [frequently] with the voice to produce multiple musically magical pathways.

These are vivid and dramatic performances – fitting appropriate into the realm to which Mr Braxton aspires. Shapes leap off from melodic lines. Mr Van Cauwenberghe clearly hears in his inner ear what Mr Braxton’s compositions broadcasts as if onto the interpreter’s proverbial radar of unconventional instrumental timbre. M=The guitarist is fully attuned to this broadcast thus unerringly entering into the composer’s zone and intentions for this music, realising Mr Braxton’s ideas altogether faithfully. 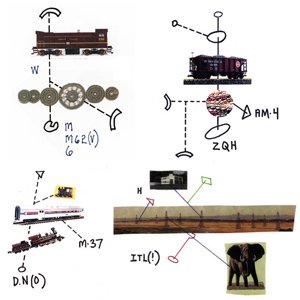 Kobe Van Cauwenberghe’s Ghost Trance Septet: Plays Anthony Braxton Although Mr Braxton’s may artistic conception may be accessible for the musically adept to wrap his or her advanced mind around – a melodic line sets up the approximate musical geography for the work before the interpreting musicians begin to embellish the storyline – yet Mr Braxton’s work is among the most technically demanding in the past one hundred years [at least]. This means that artists embarking on his repertoire have to aim to speak and sing in the composer’s radicalized musical language. Here too Mr Van Cauwenberghe’s septet – comprising musicians similarly attuned to Mr Braxton’s radical-speak particularly the prodigiously gifted brass player Niels Van Heertum – excel in their interpretations of the four works involved.

Disc One begins with the hushed sonorities of Composition No. 255 perched at the edge of audibility. Guitarist and the rest of the septet generate music in structural arcs that – as the composer probably envisioned – extend instrumental techniques and simultaneously shatter melodicism, harmonics and rhythmic patterns pf musical convention. Here one marvels at the musicianship of p9ianist Elisa Medinilla, bassist Frederik Sakham, and saxophonist and bass clarinetist Steven Delannoye.

A long sustained passage is ripped apart with abrupt instrumental scrapings before manic pizzacatos send melodic cells scattering into the outer limits of our ability to hear them. Instruments entwine, one embracing the other. A mystical phrase by the violin of Anna Jalving soars heavenward, creating a new ceiling for the melody to soar into and shatter once more. This is done as the musicians indulge in a final earth-shattering climax of the melody.

Mr Braxton’s supple philosophical distinction between music ans noise can take some acclimatization, but the layered music of this performance [other than ones Mr Braxton is himself involved in, that is] of his Ghost Trance Music articulates the arguments in its favour with outstanding clarity. Guitar, brass, the other strings [bass and violin] players and the percussion colourist in the sublime form of Teun Verbruggen bend their technique to Mr Braxton’s characteristically exacting specifications.

Musicians blow, hit and scrape their instruments to harvest mint-fresh timbres. In the unfolding of a septet musical discourse [especially on] Composition No. 193 a more highly evolved piece ensues. Mr Verbruggen’s mallets on skins combine together with the nerve-endings of the fingers and lips of other musicians to produce marvellous musical architecture.

Jagged sounds overlap and blend with super-pizzicato-fluido – while actual orchestral instrumentation transforms Composition No. 264. Instruments metamorphose into resonating sound objects as they are resolutely turned away from their usual orchestral function. Inside this dramatically expressive music is an altogether other kind of beauty exclusive to the music of Mr Braxton.

Both these recordings speak to the breakout of Kobe Van Cauwenberghe – a musician with a fertile imagination capable penetrating virtually anything a composer might throw at him – in this instance the ingenious Anthony Braxton who stands head and shoulders above perhaps any 20th or 21st century musician.