Ronald Shannon Jackson (Jan 12, 1940 – Oct 19, 2013) died of leukemia on Saturday morning, October 19, in his hometown of Fort Worth, TX. He was 73 years old. The only drummer to record with Albert Ayler, Cecil Taylor, and Ornette Coleman, Jackson was a polyrhythmatist of power and imagination who was also technically excellent to the extent that he could do a sort of one-handed role, albeit briefly. Perhaps more important than his drumming, as dazzling as it could be, was his composing. He developed Coleman’s harmolodic music into his own highly personal style with his group the Decoding Society — and, after nerve damage interrupted his drumming career, composed more classically oriented music, including string quartets. When he was able to make a comeback, it was unfortunately also interrupted, by a heart attack while on tour in 2012. 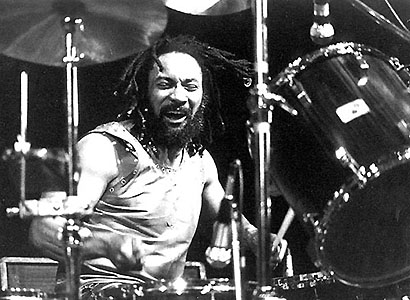 After an upbringing in a musical family (his father owned a record store and his mother was a church organist) and the sort of solid public school grounding in music’s rudiments that used to be common but seems endangered nowadays, Jackson played with such esteemed Texas locals as James Clay. Moving to New York in the mid-’60s, he became part of the free jazz scene, recording for ESP-Disk’ with Albert Ayler (Live at Slug’s, ESP4025), Charles Tyler (Charles Tyler Ensemble, ESP1029), and Marion Brown (the one track by Brown’s trio that’s on The East Village Other, ESP1034) even as he was also working with more mainstream musicians, including Betty Carter and Charles Mingus. In the following decade he moved more devotedly into the free scene; this was when he worked with Taylor and Coleman.

In the 1980s Jackson began recording as a leader, racking up an impressive discography while also frequently working in collaborative ensembles with the cream of the NYC scene. You can stack his ’80s output up against anyone’s in terms of in both quality and quantity. After returning to Texas in the 1990s, Jackson’s recorded output became less prolific.

Compositionally, Jackson (who also sang and played flute and shalmei) combined the collective voicing/improvisation principles of harmolodics with his complex polyrhythms, a knowledge of African music gained in travel there, and (though somewhat submerged) a feeling for the blues inherent in his Texas upbringing. He preferred higher-pitched instruments, saying that’s where he naturally heard musical lines, which explains his flute playing, his distinctive use of guitars (in particular, his Red Warrior album has three guitars and no horns), and his preference for alto and soprano saxophonists. His music is full of interlocking lines and rhythms and deserves wider dissemination, though its complexity may work against its casual use by other musicians. Jackson’s role as mentor to a generation of young New York musicians should also be noted, with a number of Decoding Society members (Vernon Reid of Living Colour and Melvin Gibbs of Rollins Band, to name just two) as having shaped their outlooks crediting him musically, philosophically, and in terms of business sense.

A more personal note from Steve, who wrote all the above: In 1990, starting out in music journalism, I had the privilege of interviewing Mr. Jackson for a small music magazine. I was armed with a moderate knowledge of his music (I owned all of his LPs as a leader that had been released by then) and practically no experience doing interviews – it was the first one I’d ever done in person. I was invited to his practice studio, where he generously shared his knowledge and his time with me. He was a true gentleman and one of the most astute musical minds it has been my privilege to speak with. And a pretty fair businessman for a musician: he told me that whenever he went in the studio, he made an album for the label and another album for himself that he could sell at a later date. This goes some way toward explaining the veritable flood of RSJ material dating from the 1980s: counting collaborative groups, at least 28 from just that decade! My favorites are Man Dance and Barbecue Dog, both with his band The Decoding Society and both on Antilles.