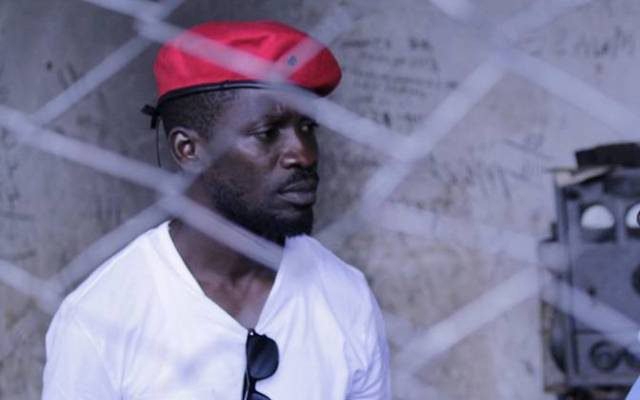 Ugandan musician and opposition lawmaker Robert Kyagulanyi, better known as Bobi Wine, has been arrested after an incident in which security officers shot his driver dead, a police spokesman said.

“We arrested Bobi Wine and others this morning and he is in our custody,” said Emilian Kayima, Uganda’s police spokesman.

Kyagulanyi was arrested in the north-western town of Arua where he was campaigning for an opposition candidate in a hard-fought by-election that also drew President Yoweri Museveni in support of the ruling party candidate.

Following parallel rallies on Monday, Kayima said Kyagulanyi was arrested for obstructing the presidential motorcade, during which one of Museveni’s official vehicles had a windscreen damaged. In the ensuing chaos, police fired live rounds to disperse the crowd, killing Kyagulanyi’s driver.

On Twitter, before his arrest, Kyagulanyi alleged the killing was a case of mistaken identity.

In a move that shows solidarity for Bobi Wine, who now faces a death sentence, some of the world’s leading artists and activists have come together to make a public non-partisan appeal for his immediate release the text of which reads:

“We, the undersigned, strongly condemn the arrest, imprisonment and vicious, life-threatening physical attack by Ugandan government forces on popular Ugandan singer and Member of Parliament, the Honourable Robert Kyagulanyi Ssentamu, a.k.a Bobi Wine. We also condemn the unprovoked killing of his driver, Yasin Kawuma as well as the beating and arrest of three other opposition Members of Parliament.

The above incidents took place in the town of Arua on Monday August 13, where Bobi Wine was attending a bi-election rally in support of an opposition candidate, Kassiano Wadri. It is claimed that stones were thrown at the convoy of President Museveni who was there to support his candidate. Museveni’s security forces then made their way to Bobi Wine’s hotel where Yasin Karuma was sitting in Bobi’s car and was shot in the head at close range and killed. Yasin was sitting in the co-driver’s seat where Bobi Wine normally sits. The possibility of an assassination attempt cannot be ruled out. They then entered the hotel, kicking in doors and arresting many people, including hotel staff, journalists and other opposition MPs until they found Bobi who was beaten to within an inch of his life and arrested.

They claim to have found two sub-machine guns, a pistol and ammunition in Bobi’s room and he was charged with treason and taken before a military tribunal on Thursday. His face was badly swollen and he could neither talk, see or walk, so vicious was the beating he’d received. The charge against him was reduced to the illegal possession of arms and he is currently detained in an army barracks with limited access by his family and lawyers until a further appearance before a military tribunal this coming Thursday.

We call upon the Ugandan government to ensure his full access to medical treatment, to allow a full and impartial investigation of his violent arrest and imprisonment and of the brutal killing of Yasin Kawuma, and to follow internationally recognised procedures and safeguards in proceeding with any case aganst him.

We pledge to remain vigilant about his ongoing detention and to use our voices and networks at the local, regional and international levels to raise awareness about his case, to press for his immediate and unconditional release, and for an end to this and other acts of political repression and violence in Uganda.

We also call for the lawful and humane treatment of the more than thirty other detainees that were arrested at the same time as Bobi Wine. Some of them are also fighting for life.

N.B. At the same time as Bobi appeared before the tribunal the results of Wednesday’s bi-election were announced. The candidate, Kassiano Wadri, who Bobi had come to Arua to support, had won. He also remains in custody, still charged with treason.