Then one day, a message on Facebook and a link to unmixed music by Ronnie Cuber and Toninho Horta… It was a single. Oh No! I thought. How I hate singles, which have always reminded me of a strangely Catholic and chaste, yet-very-unfulfilling musicus interruptus; a kind of false start to a favourite song… To make matters worse, Arnold asked me to suggest a possible name for a “future” album by Ronnie Cuber and Toninho Horta. Of course, my brain froze and I was literally almost dumbfounded. The silence was broken (at my end) with Clark Terry-like “Mumbles” and like Terry, I was completely incoherent. But the music was formidable; the soli by both Cuber and Horta was breathtaking. And I fell in love with music all over again. I continued to pester Arnold, for time to time with a flurry of emails and text messages asking “has the record been completed?”… “Is the mastering done?”… and finally – as those who know me well – a pleading for a “physical” copy of the record. 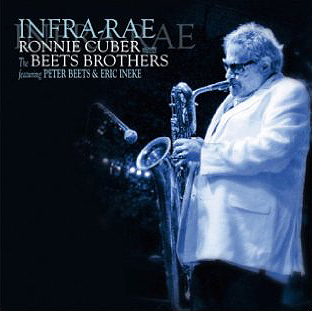 I heard nothing until a few weeks ago when I received an email about what I thought was a radio interview with Ronnie Cuber and Toninho Horta that took place (in my ignorance) somewhere in France. I began to correspond not only with Roberta Arnold at this point but also with Gerard Dugelay, a radio producer from France. Dugelay is the co-producer, with Alain Duret, of the weekly jazz programme La Note Bleue for Radio Jerico Metz (aired over the Lorraine area in France). The web-site address is: Radio Jerico Metz. A year ago, Dugelay told me, he and Duret had celebrated their 1000th program, aired across Lorraine. Dugelay also informed me that sixty per cent of their programs were dedicated to “guests”, particularly musicians from North-East of France, also from Luxembourg, Belgium and that special programs were all about the festivals of Lorraine. I asked him what era of jazz he liked and he wrote back, “We love jazz from 1917 to 2017!!!!” Four exclamations, and then…

“I love very much the baritone saxophonists. I love very much the music of Gerry Mulligan and with Kenneth Hallqvist I wrote the Gerry Mulligan discography and my collection of unissued recordings is huge!!!! (Four exclamation marks again). And I love Ronnie Cuber’s music. Since 1999 I’ve realized many programs about Ronnie Cuber and I’ve heard him in concert many times in Netherlands, Germany, Belgium, Luxembourg, and France!!!! (Once again, the four exclamation marks) 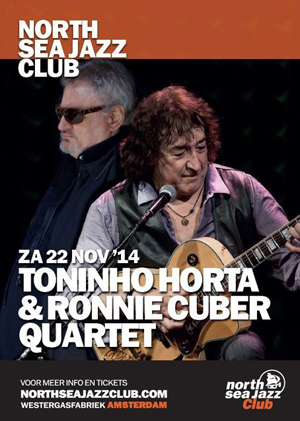 I have been in contact with Roberta Arnold for 18 years.” The short email ended with: “Hope you enjoy the attached.” I opened the attachment and my jaw dropped. This was no ten-minute-or-so interview. It was a full radio broadcast from the North Sea Jazz Club, Amsterdam, well over one hour long.

The recording of the broadcasts comes from a concert by Ronnie Cuber on baritone saxophone and flute, Toninho Horta on guitar and vocals as well as in the role of all-round raconteur, together with Marius Beets on bass and Marcel Serierse on drums. After a lengthy, and extremely informative introduction to Ronnie Cuber and Toninho Horta, the concert continues with Horta calling the tunes, telling stories and joking with the audience, sometimes drawing Cuber into the gentle banter. The music that fills the hour or so is a delight not only those present in the Club that night, but also Gerard Dugelay and the thousands of hardcore jazz fans, and fans of Radio Jerico Metz.

In many ways this concert with the quartet is revolutionary. It seems to be what everyone – especially myself – has been waiting for, not the least because Ronnie Cuber and Toninho Horta return to the styles of both their greatest achievements – in the case of Cuber, everything from swing to bebop and beyond, as well as Latin Jazz and atmospheric Brasilian fare. It is a free-wheeling affair made for mutual inspiration and joy. I was eager at once to write to Roberta Arnold and ask if this was the album that I had been waiting for since the re-release of Cuber Libre.

With the performance – and the broadcasts – this band introduces a new generation of baritone aficionados, Brasilian music aficionados, and fans of this music to Cuber’s and Horta’s individual and collective genius and charisma. It is a starry affair with Beets and Serierse also in the super constellation, and the music throughout roars with the kind of creative fire you’d come to expect from a jazz immortal (Ronnie Cuber) and an iconic Brasileiro (Toninho Horta) together with two flying Dutchmen. Horta is every bit a natural peer of the Ronnie Cuber realm and follows his lead from time to time in a string of Cuber favourites. Horta and Ronnie Cuber play with the familiarity of not just close friends, but blood brothers and Horta also speaks and sings with shared wit and warmth.

Throughout Ronnie Cuber reigns supreme; then abdicates in favour of Toninho Horta, who later abdicates in favour of Cuber, and again and again, and again…Whether delivering jazz standards or Brasilian ones by Tom Jobim, the musicality and power of Ronnie Cuber and Toninho Horta is remarkable, making everything the two men touch their own; Cuber illuminating the simplest of phrases with his singularity as does Horta too. Their showmanship is as natural as their musicianship from end to end; in both the two geniuses reach out to the audience, as you can hear in their applause. And you can hear why younger musicians in Canada and America, Brasil and the world, even if they are sceptical of the anecdotal history of music or its griots and their forebears, will remain awed of Ronnie Cuber and Toninho Horta – masters of jazz and Brasilian music, and each a life force in himself. Less men than each one a miracle for eternity…