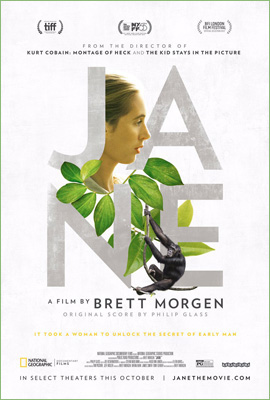 Jane Live with Jane Goodall while she conducts her groundbreaking, enthralling work with chimpanzees, which she revealed to be so like humans. Fifty years ago, a National Geographic filmmaker was sent to join her in the Tanzanian jungle, where he captured over 140 hours of 16mm footage that was never used. Today, Academy Award–nominated director Brett Morgen, whose skills of documentary portraiture range from musician Kurt Cobain (Cobain: Montage of Heck) to producer Robert Evans (The Kid Stays in the Picture), takes the footage and sets it to a dreamy orchestral score by Philip Glass in this gorgeous, and ultimately very moving, time capsule.

Andria Teather, Chief Executive Officer of The Jane Goodall Institute of Canada, in attendance for a post-screening Q&A on Wednesday, November 15 at 6:30 p.m.