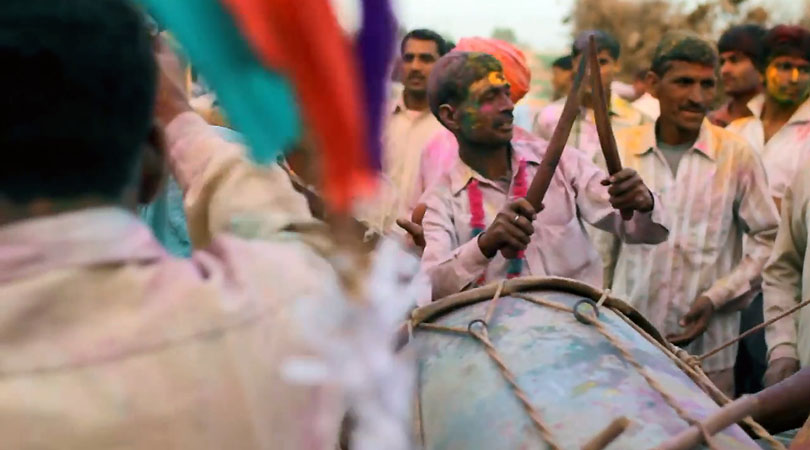 A Film by Prashant Bhargava – Music by Vijay Iyer

For Prashant Bhargava, who directed Rites of Holi and for pianist and composer Vijay Iyer, who scored the film, the template for the film and the score was Igor Stravinsky’s The Rite of Spring and in fact there may also have been several similarities between the two multi-media events. Holi, the festival of colour, of friendship and love celebrates the very fecund nature of Spring, which, although essentially an Indian festival involving Indian rituals, temples and street celebrations is now a very public affair in many countries; as global as Spring itself. The Rite of Spring/Le Sacre du Printemps, a ballet first performed in 1913, by Sergei Diaghilev’s Ballet Russes, featuring the great Vaslav Nijinsky, with stage design and costumes by Nicholas Roerich—also celebrated the fertility of Spring. Stravinsky’s music, Diaghilev’s ballet, and Mr. Bhargava’s film all have a similar rhythm (Prashant Bhargava admits to cutting his film to the rhythm of Stravinsky’s score/Diaghilev’s ballet). The interminable pirouettes of Nijinsky are reflected in the caressing imagery of the camera on the pirouetting dancer/celebrants who are protagonists in the film. The pagan rites of spring also deal with the myth of Holika, the evil sister of demon king Hiranyakashipu, who ascended a burning pyre which killed her as she tried to trick a devotee of the gods, Praladha thus signifying the triumph of good over evil is the significance of the holy fire. All of this is seen in the ravishing footage of the film. 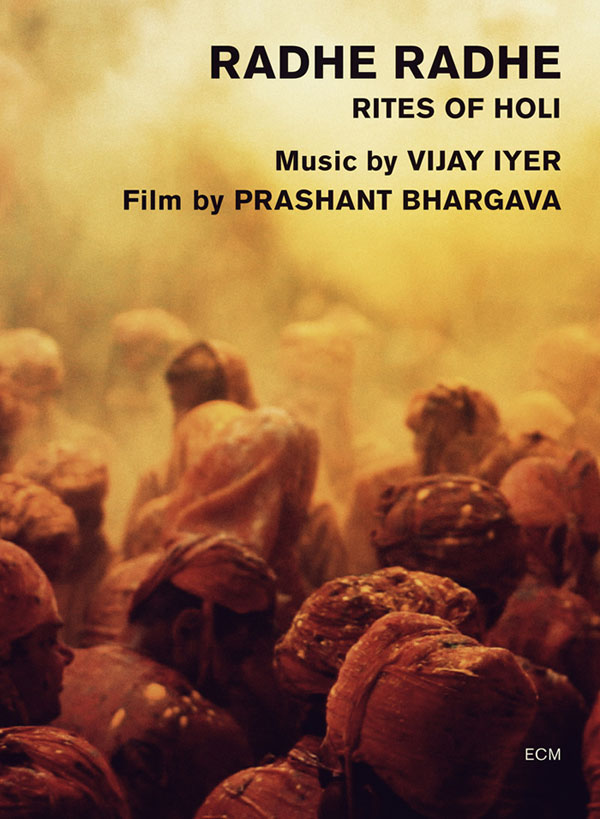 But the film has a narrative that is greater than the tracing of the rituals that form the build up to the Holi festival depicted in the film. And this has to do with the title of the relationship between the Queen Radha, who fell in love with Krishna. The demi-god Krishna was stained blue by a pigment; a spell that was cast on him. He has hidden himself ever since he was a child out of embarrassment. But the ritual splashing of colour during Holi enables Krishna to reveal himself and in colouring the face of Radha, he is able to overcome his shyness and consummate his relationship with his beloved. This narrative is fraught with a powerful sexuality that is underlying throughout the film and that has to do with the relationship between Radha and Krishna. It begins with Radha dressing herself in slow, deliberate movements; putting on her veil, bedecked with jewelry, eyes seductive and a smile that is beckoning. The performance by the American actress, Anna George, who seems perfect for the role, is outstanding. Ms. George is part seductress and part devotee and plays the part with splendid understanding. Although she is called upon to act with her beautiful eyes almost throughout the film—the close-ups of her face are splendidly descriptive—there is a scene, just before she consummates her relationship with Krishna, where she is laughs in triumph. It matters not at this point whether this is in triumph or because she has effectuated her relationship. Her smile and laughter is a spectacle that will not be forgotten in a hurry as is the sequence at the dénouement of the film, when her face is coloured by Krishna and they become one. The suggestive nature of the parts of the film where Radha and Krishna interact is one of the highlights of the film Director of Photography Craig Marsden shares the cinematographic duties too. He has a great sensibility for the riotous festival and Jay Silver, who is credited with directing the Radha-Krishna sequences, does well to capture the Radha in her intimate moments almost like an interloper.

Perhaps the most unusual part of all is played by Vijay Iyer, pianist, who composed the score. Unusual because Mr. Iyer had to become detached enough to compose a score of universal proportions as well as to avoid becoming entrenched in Stravinsky’s memorable score. Mr. Iyer does well to avoid all of this and as a result actually comes up with some of the most memorable aspect of the film. His music is intense in parts where the brightness of Holi si depicted. It is spare and caressing in sequences where Radha is depicted. His score is written for strings and reeds, which is also unusual, but captured moments of dolour as well as of ebullience. The film—another similarity between Stravinsky and the film—is broken up into two parts. “Adoration,” which in its most abstract form is all about the ecstasy and sensuality of the vivacity and sexuality of the festival and the subtext; and “Transcendence” which deals with the transmogrification of the festival into its spiritual state and therefore is more contemplative and profound. This is where the palette of colours in the music becomes important and where Mr. Iyer’s work is at its strongest, as is the work of the International Contemporary Ensemble who interprets Mr. Iyer’s score with absolute brilliance.