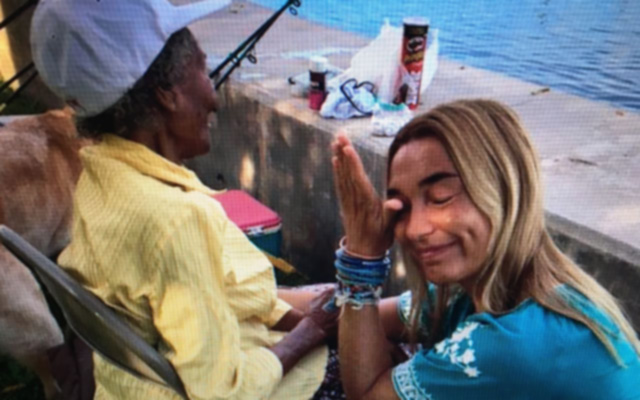 Maria Cabeza, a frequent contributor to JazzDaGama, is also a poet, painter and designer. In her frequent walks with her son, Santiago and their dog Indio she has often met complete strangers, with whom she has often shared many an intimate moment, including some when she has been almost eerily invited into their very souls. Many of these moments inspire poems, one of which appears bellow. This poem comes with a short preamble:

“My story begins while I was living in the USA. On one of our walks I met a black lady by the pier once. She was fishing. I was walking my dog, Indio. It is said that Labrador dogs are wise and intuitive; I must admit I believe that too. 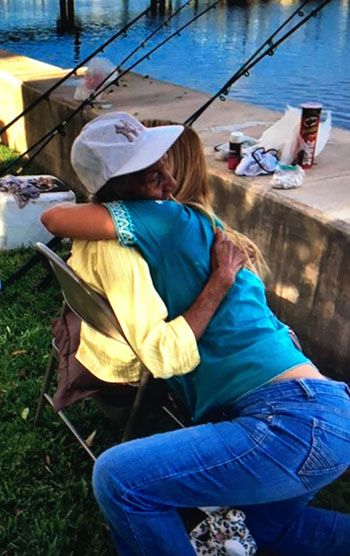 “Indio almost run toward that woman and when he reached her, he began to lick and kiss her furiously. When I reached them, I found the lady staring at the water, her fishing rod in her hand, her eyes tired, dry but strong.

I said hi to her and, without hesitation, I just hugged her. Her name was Clarice and she trembled at my touch.

“This quivering of her body scared me, and I could feel an immense mix of emotions coursing through her body, trespassing across her soul, her spirit and her most inner thoughts. She said to me, “I knew God would send an angel one day. Oh Lord! Thanks, thanks for letting me see this beautiful smile!”

“I was puzzled and frightened. Suddenly I began to experience her grief inside me and I began to sob and could not help myself or stop my own crying.

“Indio was quiet now; witness to a miracle. A blessing for Clarice, it seemed… because, as I learned, it was the first time in her ninety years or so that she, a black woman, had been hugged by a white woman like me.

“I realised, of course, that in this moment when I held her I felt and intimate illumination; an enlightenment when I knew that I was the one was the one who was being blessed. And so, I wrote this poem to honour Clarice, a woman whose mourning seemed to end the day we hugged.”

Chocolate Lady
(in honour of Clarice)

Never trust a man
who kisses with his eyes wide open
Love is blind, it’s a feeling from the senses
Live and die, again and again

I asked the obvious
she just said he left her for no reason
Her chocolate melted, her sugar turned into bitter ice
But her eyes were still strawberry red
Crying was her shadow, her new friend

We talked for a while
I told her my stories but she just sighed
At last she started weeping, little ice cubes dropped down
It was time to go
I gave her my half broken heart