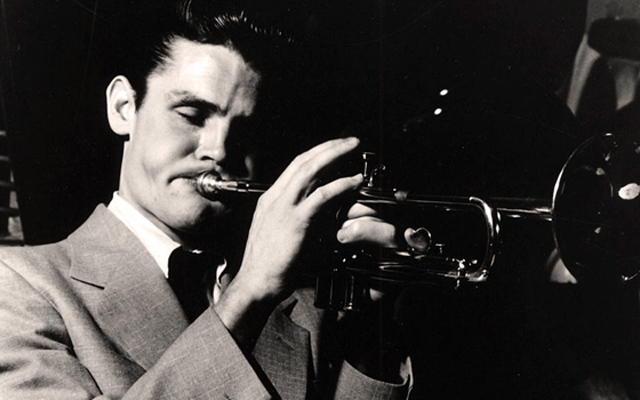 Perhaps cinema goers – including music aficionados, musicians, those mindful of Chet Baker’s documented life – have been seeing this film, Born To Be Blue for the wrong reasons. It is not a biography, nor was it ever meant to be. Robert Budreau, its writer and director has always meant to mix fact and fiction. And considering that it’s all over in about 90 minutes, he does a remarkable job of that. Even Budreau’s compressing past and present in his story, albeit using the fairly predictable device of black and white (past) and colour (present), is fairly well handled. But it is the moulding of the characters that is the film’s strongest suit.

Ethan Hawke could not really have been a doppelgänger but he is as close to one as might ever been found. Hawke does a fine job of getting into character. His performance is light and dark. Light and dark when describing Baker’s interaction with Carmen’s Jane/Diane. And extremely dark when telling the story of Baker’s battle with drugs and monumentally dark in the last part of the film, when he sinks back into heroin after shying off it for a great part of his relationship with Diane. And Hawke is at his finest when playing Baker. Taught to mime the playing of his trumpet expertly he gives a fine account of Baker’s ‘playing’. (The actual playing is done by Hawke’s tutor, Canada’s Kevin Turcotte, a trumpeter with a marvellous musical history of live and studio recording). 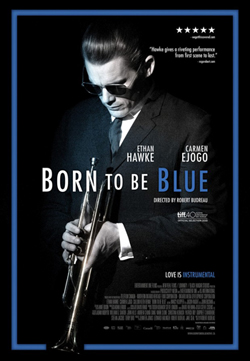 The rest of the cast is superb; Carmen Ejogo is especially so. Given the task of being both a flake (as the actress she is selected to play in the doomed film in which she and Baker meet), and as a strong woman who falls hopelessly in love with Baker, her transformation is seamless and utterly convincing. Although Hawke and Ejogo carry the film Stephen McHattie (Baker’s Dad) and Janet Laine-Green (Baker’s Mum) perform exquisitely in the time they have been given with bite and sardonicism. The part in the story where Baker goes over to spend some time on their farm to dry out has some of the most poignant moments in the film, especially in the interaction between Baker and Dad. But not all incidental characters play their roles to the hilt. Kedar Brown (as Miles Davis) looks glum rather than arrogant and sardonic (which Miles was). And Kevin Hanchard as Dizzy is hardly the funny, prank-pulling Dizzy Gillespie. The hard edges between black and white jazz players also remain to be developed throughout the film.

Still, even with its minor flaws Born To Be Blue is a wonderful film. It tells one aspect of Chet Baker’s life – his losing battle with drugs – most convincingly and poignantly. Even the fictional elements in the film between Baker and Jane/Diane are beautifully played by Hawke and Ejogo. But ultimately this is a film about Chet Baker the musician. And the music is most expertly done, considering the fact that it is not actually played by Baker. There are two reasons for this. First is Kevin Turcotte’s playing. Here is a trumpeter who also gets into character for this film. His playing on ‘My Funny Valentine’ is absolutely gorgeous. In fact the whole score is spectacularly put together and for this the Canadian pianist David Braid deserves full marks, even accolades (which will, no doubt, come fast and furious). Finally there is Ethan Hawke, who sings Baker’s parts sounding eerily close to Chet Baker.