Yvonnick Prené, pone of the last harmonica players to join the stellar cast of musicians on that instrument is taking nothing for granted in this performance entitled Breathe. Thus his breathing is fluid and his playing crisply detailed from opening to close on this disc; from ‘Blues Comes Down The Seine’ to ‘As Night Falls’. These and other tracks benefit from his precision and clarity, with intelligent use of dynamics and an ear for the expressive potential of repetition and variation. 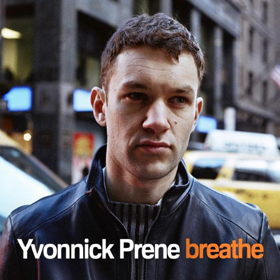 In guitarist Peter Bernstein as Prené’s duet partner, together with Jared Gold on Hammond B3 organ, we hear bite and astringency to offer the heartfelt delivery of aching bluesy directness as there’s a reticence to the slow sections which are ecstatically elevated and which no amount of artful darkening and intensifying of the blues of the organ and the guitar can disguise. The elevated and thoughtful readings of Yvonnick Prené’s own compositions as well as the subtlety he brings to ‘Looking Up’ by Michel Petrucciani and ‘Got to Go’ by Monty Alexander add further atmosphere to the already characterful music on the album, especially when tempos are carefully maintained by drummer Allan Mednard.

Breathe, both album and song, invites you to listen to Yvonnick Prené’s music that unfolds with sizzle and bop and a dash of vinegar and honey as they break from being overly polite. Prené’s nimble technique, sweet tone and elegant phrasing enliven a wide-ranging collection of memorable tunes. The immediacy of Prené’s musical language is very appealing. I might even go as far as to suggest that this is Yvonnick Prené’s ‘giant steps’ into the realm of the harmonica.

Track List: Blues Comes Down the Seine; Looking Up; Breathe; Got to Go; Mr. Tix; The Comedian; Armorica; As Night Falls.