There has never been a Yellowjackets performance – in studio or on stage – that has not been brimming with expressive power and radiant beauty. However, this one, on Jackets XL with the WDR Big Band, one of the truly great large ensembles in the world, will surely rate as one of the most memorable for it is packed from beginning to end with the very best of the Yellowjackets’ magnificent repertoire bolstered by great swells of orchestral fills rising and falling as the WDR Big Band strategically enters, sustains and then and exits the music. Moreover, best of all this music, conducted by the masterful ‘Jackets [reeds and] woodwinds-meister, Bob Mintzer, has been freshly arranged by him, as well as [in two cases] by Vince Mendoza [co-arranger] and Russell Ferrante. 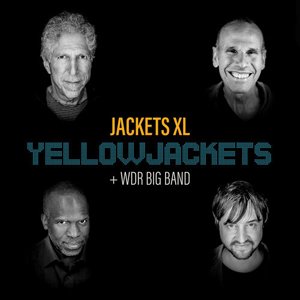 The airy nimbleness of the Yellowjackets’ music is matched to a richness of sound that sometimes seems impossible to conceive from a group of just four players. This sound has been honed over several decades since Mr Ferrante, Jimmy Haslip, Will Kennedy and Marc Russo came together in and as guitarist Robben Ford’s band, then in three notable incarnations [Bob Mintzer in for Marc Russo and, first Felix Pastorius and later Dane Alderson in for Jimmy Haslip] the Jackets became Jackets 2.0, then 2.0.1… and now [with these splendid interpretations of Mr Ferrante’s and Mr Mintzer’s compositions] they have certainly earned the moniker of “Jackets XL”. It’s easy to perceive how the group has since evolved with the inclusion of Mr Mintzer, who comes in with his prodigious genius for composition and performance, and Mr Alderson – aflame in every one of his soli on this disc – building on the group’s bass lines with his architectural approach to the gravitas of the group’s music.

The quartet – together with the WDR Big Band – widens the dynamic range and balance of this music with interpretations that are fresh, ardent and always swinging and – at times – rocking with an atomic energy. Passion and precision are one in music and recording. The apogees [there are at least three that come at the start, middle and end of the record] are the darkly beautiful “Downtown”, the fervent “Even Song” and emotionally ascending “Revelation”. But even elsewhere there is music where the melodic lines are beautifully moulded, the harmonies and chords are hushed, the highpoints are gorgeous and the rising and falling in the dénouements of the music subtly atmospheric – especially in the climatic roar of “Revelation”.

Mr Mintzer is now the music director of the WDR Big Band. He is thus in a unique position to unite both his constituent parts [as member of Yellowjackets and the WDR Big Band] in such a manner as to bring about the best musical result: a combination of sensuous luxury, effortless precision – both with characterful winds and the warmth of brass. Soli are mostly performed by the [ersonnel of the Yellowjackets, but key ones [such as in “Dewy”, a tribute to Miles Davis], are also contributed by members of the WDR Big Band – in this elegant case by Ruud Breuls. The brilliant WDR altoist Johan Hörlen rises to eminence on “Downtown” and the incomparable Paul Shigihara’s guitar solo lifts up “Even Song”. Elsewhere The musicians of the WDR Big Band – brilliant as they already are at reading – also offer deeply interiorised interpretations of this music. The result is a truly “legacy” recording of the Yellowjackets music; a big band version of some of the most artistically iconic music to absolutely die for.