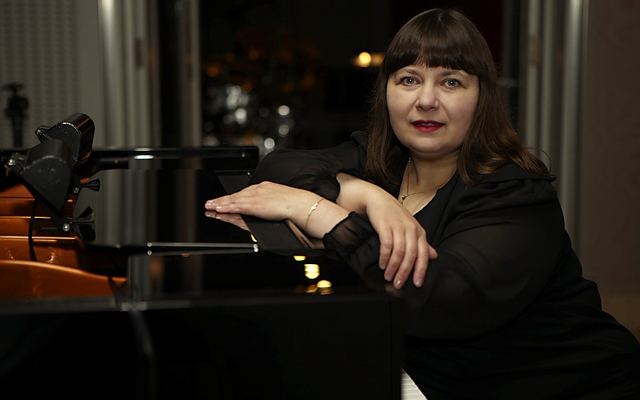 This is an enthralling disc, the first of the two that Yelena Eckemoff will probably do in 2016 as she, by her own admission, has been producing two each year since 2010. It is compelling on many different levels. To start with there’s the sense of sharing the sheer physical thrill of Eckemoff’s keyboard-writing. This is particularly evident in the faster movements such as the fierce and brilliant fugal piece ‘Love Train’ that features a three-way counterpoint between Eckemoff, violinist Mark Feldman and bassist Ben Street and in the outer sections of ‘A Date in Paradise’. Common to both is a sense of being fleet but never breathless, with time enough for textures to tell. 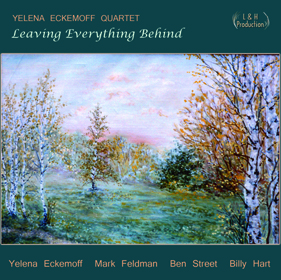 At every turn you get the sense of Yelena Eckemoff flexing her compositional muscles in this through-composed music that leaves plenty of room for improvisation. There is of course nothing innately classical or jazz about them and the origin though clear in in the title still has elements that are shrouded in mystery and need some decoding to get to, though in Yelena Eckemoff’s unabashedly trusting notes, reveals the true and deep effects of a gut-wrenching displacement of family is so memorably presented and so memorably recorded in eleven episodes. There’s a sense of Eckemoff demonstrating just how much variety she can introduce into a suite built the elements of that form which she has turned into her own and then extended into one she has made her own. In Eckemoff’s hands – and in those of the other musicians – ‘Mushroom Rain’ and ‘Spots of Light’ occupy their own worlds in terms of mood. Thus there’s a palpable delight in the rhythmically ungainly themes from which Eckemoff invites drummer Billy Hart to fashion his musical responses inventively, which are at once strong-jawed and supple. We’re always aware here of the subject, for instance, as it peeks through the texture in different registers or reappears stood on its head, yet it’s never exaggerated as is sometimes the tendency with less imaginative pianists – and drummers.

How Yelena Eckemoff can dance at the piano in the movements of every piece which are urged into life through subtle dynamics, voicings, articulation and judicious ornamentation. The very same brilliance is in evidence in the playing of Mark Feldman, who is the other main character in this wondrous narrative. And you can also say of both that the way they have considered the touch and dynamic of every phrase played means that these are readings that constantly impress with fresh details each time you hear them. Even in the most apparently unassuming numbers such as ‘Ocean of Pines’ there is a sense of intrigue, again bringing multifarious shadings to the music. Here, while Feldman revels in its echoing harmonies, Eckemoff draws you daringly into her own world as grandiose sonorities become more and more withdrawn.

You can be in no doubt of the thought that has gone into this enterprise, from Yelena Eckemoff’s ordering of the pieces, the story behind each, which she explains in the booklet, to the programming of the music itself right from the opening ‘Prologue’. At every turn she harnesses the power of the piano in the service of the music to mesmerising effect, all of which is captured by a warmly sympathetic recording and engaging booklet-notes by the composer herself. Let’s cherish this disc, like we ought to do with every one that Yelena Eckemoff produces.