Home Music Yelena Eckemoff: I Am a Stranger in This World

Yelena Eckemoff has made an outstanding artistic leap in her musical career by even attempting to tackle the subject of The Psalms as musical literature. First with her album Better than Gold [L & H, 2018] in which she set ten Psalms to original music, and now with I Am a Stranger in This World, an even more ambitious undertaking of eleven Psalms.

Both works have to be understood in the context of what The Psalms were as art and the subject matter that is contained in them. So vast is the latter aspect of The Psalms – some were plangent prayers to The Almighty God, others prophetic visions about Him, still others were a call to war, still others accompanied thanksgiving sacrifices and so on. There are 150 Psalms in all and very few are alike in theme and content. 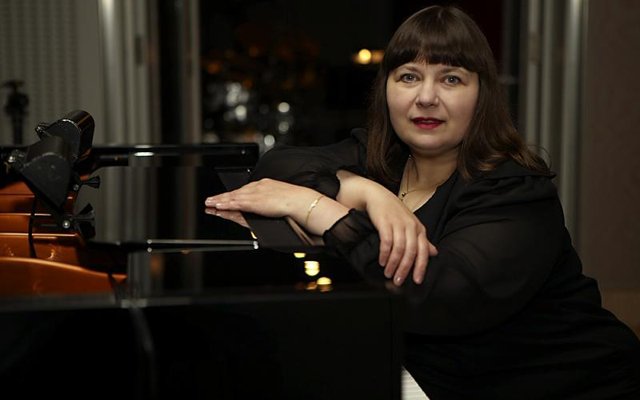 All of this makes Miss Eckemoff’s recording I Am a Stranger in This World, based on eleven of those Psalms a very courageous undertaking indeed.

Like all sacred and secular poetry – proto-historic and historic [epic and lyric] has always been sung – with or without instruments depending on when and where it has been performed [in its original form, that is]. The Psalms are no exception. King David – one of the greatest and [probably] the most frequent composers and performers of the lyric poetry of The Psalms was believed to have been an avid performer – both an instrumentalist and as a cantor in the Temple, which he helped build in Jerusalem. Other Psalms were attributed to the patriarchs and still others to the prophets – Jeremiah; Isaiah is credited as the composer of some of the greatest Psalms ever written.

But because of their antiquity and the impossible requirements of scholarship required for their study, much remains historical fact [if such a thing is ever possible] remains unresolved. In one’s humble opinion, and based on one’s ongoing study of The Psalms, no one has done more to advance the knowledge and appreciation of The Psalms – one of the most complex and beautiful books of the poetry of antiquity – than Bishop A.F. Kirkpatrick D.D., Dean of Ely. His single volume fin de siècle edition remains one of the greatest studies of Old Testament literature available to us in modern times.

For all of these reasons Miss Eckemoff’s double-disc ought to be regarded [and approached] as much more than a mere curiosity. Moreover the historic issues that plague any study of the poetry of the Psalms are not the only issue that Miss Eckemoff would have had to deal with. There are other issues, [also embedded in antiquity] which one would not even dare to speculate about. How did the first “sung” versions sound? How did the instruments, first used, “sound” when they were woven into the lyric? How to drag all of this out of antiquity and bring it into the contemporaneity without losing historic context?

The latter issue is the most vexing as Judaic literature is based on extremely complex realities and it took ages for Christianity to even agree on what is and isn’t “kosher” in our so-called Christian Era. But this latter facet of The Psalms would have been probably of prime importance to Miss Eckemoff, for obvious the reason of approaching The Psalms project from the Christian perspective. Moreover, what makes this task even more daunting is much more than merely interpreting the texts – no matter whether they are from older – even Judaic – or old King James sources, as the booklet notes allude to; rather it is the setting of the texts to music sans vocal – whether aria or recitative.

Miss Eckemoff’s use of instrumentation is key in this regard… stringed instruments would be de rigueur, of course. But to use electric guitars to wail what would otherwise have been the lyric content is inspired – all the more as she employs the expertise of two fine electric [!] guitarists in the form of Adam Rogers and Ben Monder. Nowhere does the former guitarist excel more than on “The Wine of Astonishment”, with its poignant use of dissonance. The effect is further dramatised by the rhythmic contribution – eloquently agitated, one might add – from drummer Nasheet Waits.

The trumpeter Ralph Alessi is appropriately ubiquitous – what would any heraldic music be without a horn after all. Mr Alessi’s is a majestic voice throughout. The guitarist Ben Monder seemingly has more playing time. And his long inventions arrive in to the music towering elliptical arcs, making for one exquisite harmonic variation after another.
One would have given an arm and a leg for more Christian Howes, a violinist of inimitable and prodigious gifts. Miss Eckemoff employs his special craft to light up the darkness of “I Am a Stranger in This World” and on the absolutely magical “Every Beast of the Field”, on the latter to hail the majesty of the Living God. Mr Howes returns the favour with the soft wail of his violin as if mimicking an aspergillum sprinkling hyssop which adds an awe-inspiring touch to both works.

The continuous low rumbling of the contrabass played by Drew Gress [albeit pizzicato and not con arco, for some reason] suggests – in the words of St. Paul, “the unutterable groanings of the soul”, while both Nasheet Waits and Joey Baron [when he is called upon to play] add splashes of exquisite colour from the rolling thunder of the drums and the hiss and splashing of cymbals. “I Shall Not Want” – Psalm 23 – played as a blues is prescient given that the blues is always evocative of sadness-to-joy. So utterly memorable are these versions that somehow the question of whether heraldic and old Judaic forms used in the Kings’ courts in ancient times.

All of this – all of the compositional settings of the Psalms and the orchestrations; in fact all of the choices of dragging the great sacred and lyrical poetry of antiquity into the modern day; all of the choices made – is on Miss Eckemoff. To that end, the rewards that thrill the listener no end all but obliterate the risks that the pianist took in bringing these works to record. She not only draws poetic inspiration from the Psalms themselves, but also inspires the musicians to convey their meaning on an utterly convincing manner.

Her choice of Fender Rhodes and other keyboards [used to create ambient and evoke emotion] is truly inspired. Her musicianship is flawless throughout – not a single note is out of place and she never overplays a phrase; on the contrary, Miss Eckemoff makes the lyricism of this poetry – among the greatest lyric poetry of any age – leap and float right off the page and into the rarefied realm… five stars…