Home Music Yelena Eckemoff: Desert
To allow oneself to be seduced by the music of Desert by Yelena Eckemoff is to be transported to edge of sand dunes in the Rub’ al Khali (“The Empty quarter” of Arabia). Even if Miss Eckemoff never experienced it by being physically present in that seemingly endless, undulant landscape her music captures its spirit that is at once unforgiving as it is capable of wrapping itself around you. The truth and veracity of the music is all-encompassing, just as Edmund Meisel’s score did for the drama of Battleship Potyomkin, (Mosfilm, 1925) the Soviet silent film directed by Sergei Eisenstein; as it brought to life the mutiny that occurred in 1905 when the crew of the Russian battleship Potyomkin rebelled against their officers. 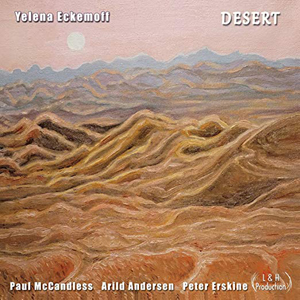 Not that Miss Eckemoff is in need for that kind of endorsement. However, the idea is to propose that a musician such as Miss Eckemoff is able to create her music in a manner that suggests the kind of out-of-body experience that artists of significant repute undergo in the act of creation. As it is with all of her work, Miss Eckemoff has created the music of Desert as if experiencing something of that nature – a musical séance – that seems somehow to have transported her to the vast expanses of sand and camels; the land of the Bedouin. It is true also that Miss Eckemoff seems driven by such European influences as might include Jean Sibelius and Bedřich Smetana should be counted – recalling, of course their profound works such as Finlandia and Má vlast (which included the piece De Moldau).

Miss Eckemoff’s Desert may comprise shorter vignettes than those of more chamber or orchestral scope by late classists. This is, after all, how the pianist conceived the album; each piece accompanied its own story using the written word in prose and verse. Similarly, with each work Miss Eckemoff may be seen (and heard) to open windows, through her mind’s eye into the Desert that she saw, and sometimes even “tasted”. Her melodies are unique and come from an exquisite ephemeral prosody, born of singular musical metre which is a collision Phrygian and Lydian modes, complete with undulating dyads, glistening arpeggios and dazzling runs as may be heard in “Bedouins”, “”Oasis” and “Dust Storm”. The latter is powerful and so potent that one recalls the experience of just such an intense ha’boob like it.

What is even more remarkable is that Miss Eckemoff was able to get the rest of the musicians to buy in to her experience and thus fulfill their parts in this music with vivid detail. The master-stroke, of course, is the inclusion of Paul McCandless. One feels fairly certain that this music may not have been anywhere near as successfully interpreted without his keening oboe and lonesome cor anglais. Add to that his masterful sojourns on soprano saxophone and bass clarinet and you have one of the most eloquent performances on any kind of chamber work anywhere in the world today. No less magical is Peter Erskine, whose genius here – far-removed from the groove of his erstwhile associations – is firmly in the pocket as well as redolent of the undulating rhythms of walking camels, while Arild Anderson’s bass comes with a majestic stoicism all its own.

Miss Eckemoff is at her best and in her grand, spacious pianism evokes the babbling voices of a souk dappled by the light and shade of the desert sun. She brings to life both the starless, ink-black desert night sky as well as a star-filled, purple one. Moreover, listened to in the warm acoustic of Rich Breen’s superb recording, after having been subsumed by the drama of her booklet notes, one is transported to a place of imposing dunes and moonlit oases, of soaring heights and mysterious depths, expectations, frustrations, doubts and hopes like the sheltering sky in a Paul Bowles novel.