If name-dropping is what it takes to put Yaron Gershovsky’s name up in lights forever then here are a few: Wayne Shorter, Pharoah Sanders, The Count Basie Orchestra, Dr Lonnie Smith, Take 6, and the symphony orchestra conductor Michael Tilson Thomas. But to me [at any rate], Mr Gershovsky’s celebrity comes from his being the longtime music director for the great Manhattan Transfer. 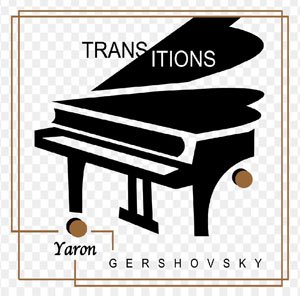 On Transitions, this recording made under his own name, we hear Mr Gershovsky playing with a tonal sheen, wide dynamic range, ear for nuance and pinpoint technique. Thus he makes a compelling case for each of the works in this repertoire. Mr Gershovsky’s multifaceted career blurs boundaries between popular and classical worlds and you will hear this in the tuneful, easygoing rendition of “Scarborough Fair” and – I dare say – on “I Got Plenty of Nuttin’” as well. But it is also Aubrey Johnson who brings a magical spark to both pieces. Her haunting, bell-like high-register singing meld well with Mr Gershovsky’s declamatory chords and carefully deployed sonorities – together to make a much deeper impact with their respective readings [and emotions] on both songs.

Mr Gershovsky possesses an almost insolent virtuosity, but he very rarely allows this to take precedence over the music. There is never any gratuitous ornamentation. Every nerve is deployed in the service of the music, its special graces and the emotions it must convey. The pianist initiates the rhapsody, of course, but then he lets the music loose onto the soloists – such as Miss Johnson on “Scarborough Fair” and the final piece, and Alex Sipiagin who squeezes the bittersweet emotions from the melody with the superb articulation of his aching solo on “Show Me the Way”. Mr Gershovsky follows the trumpeter with a solo of his own, but his is infused with élan and harmonic imagination, his loping ellipses played as if to let the song breathe and sigh.

This is music that swings and shuffles when it needs to communicate its jazzy roots. Mr Gershovsky is a worldly musician but his is a singular voice. We always hear music through this singularity. A case in point is the interpretation of Antonio Carlos Jobim’s classic “So Danço Samba”, which may be best described as a funky samba – one celebrating the classic Brasililan dance with a tinge of hot American swing and funk. Once again Miss Johnson infuses the Jobim song with her finely calibrated articulation and uncanny rhythmic equilibrium conveyed with blinding clarity, intense concentration and sparkling time. Together with Mr Gershovsky’s flexible pianism music is launched into the stratosphere with a strong sense of idiomatic swing.

The rest of the stellar cast is fully attuned to Mr Gershovsky’s artistry and musical vision. [Who would be?] And they make up a who’s-who of musical icons – from bassists Boris Kozlov and Will Lee, drummers Cliff Almond, Clint de Ganon and Ross Pederson, and flutist David Mann – all play with masterful ingenuity and as if the music has been deeply interiorised so as to play it all with idiomatic brilliance. In composition on paper and in notes that lift off the page and dance as it is performed, , “I’ll Be Seeing You” is easily the apogee of this album, which is to absolutely die for…