When you put some of the brightest minds in music together in a studio, sparks are bound to fly and, as a consequence, things get heated – but never too hot to handle. Although the idea may have originated win Walter Smith III and Matthew Stevens (not necessarily in that order), the music that emerges from a kinetic session such as this can only take place because each of the musicians hung their egos by the door before getting down to business. The result is a palpably collective expression of living in the moment and making music accordingly with each musician stepping in and out of the limelight to take a solo and a proverbial bow before receding into the ensemble thereafter. 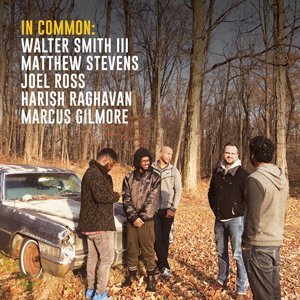 Tenor saxophonist Walter Smith III, guitarist Matthew Stevens and vibraphone extraordinaire Joel Ross are suitably bolstered by the sinewy gravitas of bassist Harish Raghavan and the uncommon rhythmic wisdom of Marcus Gilmore. Together these musicians parley with the familiarity of old friends on a recording that is appropriately entitled In Common. Their playing retains that sense of one soul associated with noble ensembles whose playing usually matures with constant association. Remarkably this may not yet be the case and yet the seamless exchange of ideas that fructify in the playing – both of soli and in ensemble – suggests an empathy that can only come when nothing is forced or exaggerated or overly mannered; tempos, ensemble and balance – all seem effortlessly and intuitively right as the musicians get under the skin of this long-limbed music.

The writing (when this is done) is idiomatic and interpreted in a manner that is both viscerally exciting and eloquently polished – such as, for instance, the work by Joel Ross on “YINZ”, Walter Smith III’s work on “ACE” and the breathtakingly beautiful ensemble playing on “About 360”, which programme notes tell us is a tribute to the late and ineffably ingenious musician and pianist Geri Allen. Of course, Harish Raghavan and Marcus Gilmore add the supple rhythmic flexibility that is also big-boned and generous, with a sense of depth and spaciousness that gives all of this music an almost orchestral scale. These (works) are, in sum, sincere and poised accounts of musicianship, a tribute to the faultless character of each individual who contributes in spades to this group as a whole.