For his 2015 TUM recording Celestial Weather trumpeter Wadada Leo Smith and bassist John Lindberg have ascended to a very rarefied realm indeed. The hour long disc features repertoire brought forth by the trumpeter and he has looked to the upper atmosphere to find inspiration, which even in his tribute to the legendary bassist Malachi Favors Maghostut, seeks to rise up to a heavenly place to find inspiration for the captivating disc. The repertoire is bathed in the magical individual styles, which these musicians seize by the throat and heart to give richly detailed performances. The range of atmospheres and emotions in the poetry of this music is winningly and beguilingly presented. The music is also whimsical (Feathers and Earth), tortured and ecstatic (Malachi Favors Maghostut – A Monarch of Creative Music) and profound (Celestial Weather Suite). 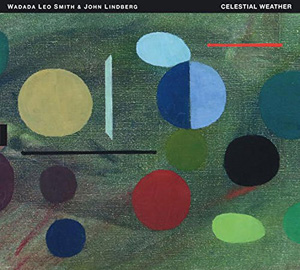 Who else but Wadada Leo Smith, who was a charter member of the Association of Advancement for Creative Music in Chicago, could have concocted these mysterious and delightful songs, recorded with lyricism and such invigorating motion and otherworldly beauty? Both Wadada Leo Smith and John Lindberg are musician’s deeply socio-political commitment and Mr. Smith’s music reflects that. But he also finds myriad nuances – both in the voices and various instruments – to heighten the expressive moments. And each instrumentalist responds also with an agile lyricism, melding trumpet and double bass in a series of magical utterances. Moreover, each of the burgeoning pieces focuses on the vicissitudes of life and are wholly compelling, each in its own way. In some places the lonesome and sardonic trumpet of Wadada Leo Smith and elsewhere the arco and pizzicato playing of John Lindberg intertwine with quiet and silken urgency of combine in a quintessential manner.

Wadada Leo Smith’s Ankhrasmation scores are truly contemporary music. They are played in an all-encompassing sound environment rather than in mere interpretation along the sophisticated, super-analytical lines of say the modern composer Pierre Boulez, and equally in the large terrifying spaces of someone like John Cage’s Etude Australes. As conducted by Wadada Leo Smith these three works ‘sing’ and ‘dance’ with consummate attention to blend and interaction. Several singularly beautiful parts emerge from chorus after chorus, most notably in the mid-sections and finales of the pieces. They are assisted to sensitive effect by Wadada Leo Smith as composer and instrumentalist as well as in the breathtaking bass playing of John Lindberg. What a great record Celestial Weather is.

Ishmael Wadada Leo Smith: trumpeter and multi-instrumentalist, composer and improviser has been active in creative contemporary music for over forty years. His systemic music language Ankhrasmation is significant in his development as an artist and educator. Read more…

John commenced his full-time professional career at age sixteen, allowing for total immersion into his work as a performer/composer, subsequently being mentored by the late, great bassist David Izenzon. Read more…