Ulysses Owens Jr has made what ought to be one of the most noteworthy – if not the most important – albums of 2019. Songs of Freedom documents a project that was first premiered in September 2016 and included renowned vocalists Theo Bleckmann, Dee Dee Bridgewater and the young and phenomenally rising star, Alicia Olatuja. The recording comes at a critical point in history and draws attention to two equally important aspects of the time in which we live.

The first is political. America is being held hostage by a government that seems to have very little value for the freedoms that all of the composers represented on Songs of Freedom stood for. At the time when the songs were written, while white nationalism was seemingly in a state of half-slumber, racism was rampant in America. The country was at war against a people with whom it had no real quarrel. This was destroying the warp and weft of a society that was founded on principles of freedom and it produced the imperative for Nina Simone, Max R9oach and Oscar Brown Jr, Abbey Lincoln, Bernard Ighner and Randy Newman to write and perform the songs so magnificently reprised on this disc. 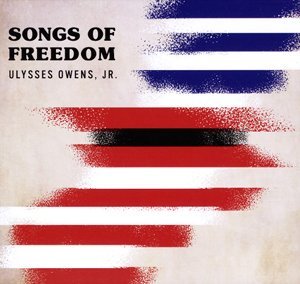 The second – and equally important – aspect of this recording is cultural and has to do with – like it or not – the plight of African-American society, how it is treated as well as how it perceives itself. In this regard the artist-as-activist often plays a lesser role to what it once did when Nina Simone, Max Roach, Oscar Brown Jr. and Abbey Lincoln practiced their craft even after their anger and hurt subsided somewhat later in life. This aspect of the art of jazz and what it stood for has often been forgotten; even discouraged among musicians and sadly even among African-American musicians to the extent that the work of figures like Wynton Marsalis and Stanley Crouch has often been disparaged like the work of Amiri Baraka and others including Angela Davis and The Panthers once was.

And then there is the music itself and how Mr Owens Jr has put together this programme. Clearly what he has strived for is something monumental; the creation of a musical palimpsest to a whole era that is in danger of being all but buried in a chapter of a history book that is not guaranteed of being part of a young student’s syllabus. (The media’s coverage of a group of students from a Catholic School in the US in heckling response to an Indigenous elder’s protest in Washington DC and the fallout thereof is further proof that what is being studied does not bode well for what a new generation of students is bringing to politics).

And so Mr Owens Jr begins this disc, naturally with “Everything Must Change”. Not just any version of the iconic song but one with a star turn by the magnificent Alicia Olatuja. This young woman has revealed herself as an artist of the first order stemming from an innate grasp of The Blues and broadening out into Gospel and Jazz vocalastics. Her instrument is gorgeous, lustrous and precise. Her musicianship is fierce as she digs into the meaning and expression of each word, bringing ceaseless variety to intense dynamics and gives every phrase a special grace. The latter is osmething she wears like a second skin in “Everything Music Change”.

The performances of René Marie and Joanna Majoko are just as magnificent. Miss Marie gets to reprise “Driva’ Man”, one of two iconic songs that the legendary Abbey Lincoln sang on We Insist! Max Roach’s Freedom Now Suite one of the musician and drummer’s greatest contributions to the library of Jazz. The honour of re-imagining Miss Lincoln’s other song from that album by Mr Roach – “Freedom Day” – is given to Miss Majoko. Both are magical. Miss Marie’s dark-hued version is impeccable and she shows not only sensitivity and technical adroitness for the challenging harmonies and tricky intervals which are raptly encompassed but she also makes the iconic song very much her own. Meanwhile Miss Majoko exhibits a gleamingly tonal quality which she blends into the music together with an articulate engagement with the lyrics.

It must be said that Nina Simone’s celebrated “Mississippi Goddam” is one of the other high-points of the disc. Miss Marie’s ferocious and focused version brings attention to the visceral, wounded original like no one else’s (other than Miss Simone’s, of course). Meanwhile the great Theo Bleckmann is cast in a role not usually like the one he often finds himself in; perhaps would even one in which he might choose to be. His otherwise almost dreamy-textured vocals are here exchanged for something infinitely darker. His brilliant renditions of “Balm in Gilead”, Joni MItchell’s “Baltimore” and “Borderline” are laced with careful texturing and yet carry the greatest impetus of the “heartache” words.

It must bear mention that interludes comprising the voices of Abbey Lincoln and Joni Mitchell speaking to the very aspects of “freedom” that this music and, indeed, this life of every human being, is all about make this recording immensely powerful. This is, of course led off by Miss Simone’s owen introduction before the music even starts. This was (oddly) not part of the track list on (my) copy of the recording. It ought to have been; just as the greater attention that ought to have been paid to the veracity of the listing itself, which was also incorrect on the printed back-end of the package. It’s a pity, but ultimately does not diminish the recording one iota; besides listeners will surely figure that one out.

The musicians are hugely sympathetic to this recording, which is essentially a vocals-driven one. The wizardry of keyboards specialist Allyn Johnson, guitarist David Rosenthal and bassist Reuben Rogers is on full display – both when they are invited into the limelight and when they recede into the background. Each of them – and, of course the vocalists as well – is fully attuned to the masterful artistry and vision of Mr Owens Jr (especially) in his role as musical director. Together they pull off a masterful performance. Clearly, however, things are just getting started for Ulysses Owens Jr. His art, as Billy Strayhorn might easily have put it, “is a lovesome thing”.