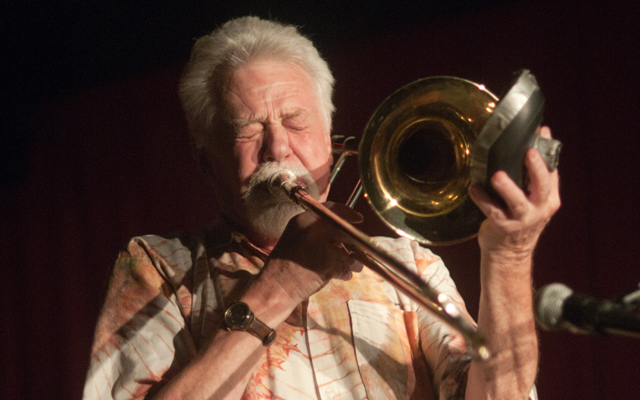 Roswell Rudd is the éminence grise of the trombone and the term might easily be used to describe his status in improvised music as well. But in Rudd’s hands and with his trombone the artificial borders that divide music disappear leaving contiguous dialects that melt, one into the other until all you have is a pure musical continuum comprised of ceaseless innovation informed by the unexpected; improvisation born of a childlike propensity to live out a life fearlessly; to create imaginative, vivid architecture, both real and imagined – in this case – with musical building bricks. And like that child Roswell Rudd is equally at ease in a musical realm that is formless as well as one in which rigid adherence to the programmatic and one in which notation and diacritical remarks are proscribed. But always and in all instances he is always himself – unflappable and untameable.

Rudd has been playing music seemingly forever and has created a discography that is both discerning and all but limitless. Even today the trombonist shows no sign of flagging. On the contrary, his energy seems to have hit that proverbial second wind and has thus become more powerful than ever. He continues to make his trombone speak and sing, smudge and smear notes, create lines that bob and weave with conjunctional idiosyncrasy, looping in wide arcs ultimately becoming ellipses as he concludes improvised journeys across musical topographies that seem impossible to contain him. But that’s only one facet of the journey. Roswell Rudd has never really abandoned the art of the song. His musical manner has always maintained a deeply-felt connection with melody. As listeners we are privy to this in two very contrasting performances: Strength & Power and August Love Song

At its heart this recording is a deeply melodic one. All its protagonists – the trombonist Roswell Rudd, the keyboard slayer, Jamie Saft, a very articulate bassist Trevor Dunn and drum wizard Balazs Pandi – inhabit the avant-garde of music. However, while each has been given a rather long leash all are bound by a secret and unwritten pact: to make melody their ultimate playground. The trombonist and the pianist are on extra-long pieces of string and the glue that binds them to the music is the artful creations of bassist Dunn and drummer Pandi. Rhythmic anchoring is nothing new in music, but what Dunn and Pandi do here is to create a wonderful and irregular Ferris wheel, and when the trombonist and pianist return to earth, a carousel of activity that seems to revolve around proverbial melodicism. 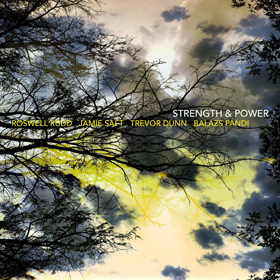 This excellent album is like an elegant railway system linking notated jazz with improvised music and the chamber music style of the post-serialist 21st conservatoire. But to describe it as such gives it the impression of overcooking when in fact the whole project is a masterpiece of subtlety. You only have to listen to Luminescent, or even Strength & Power to hear what I am suggesting. Rudd’s take on the lineage of the cool spacey trombone is less than conventional here, seeing him summoning quintessential tones from the instrument which float benignly over the sound of piano, a husky bass and drums that in their turn add a rich and not entirely predictable harmonic foundation to the music. The surprises, when they come, are effective but discreet: gamelan-like riffs played as pizzicato harmonics in Dunn’s Falls, where a delicate curlicue of a bass line underpins what sounds like a Gaelic lament as a close-knit passage develops from a single phrase. The recorded sound balances detail and warmth.

No two albums can be more different as Strength & Power is from August Love Song and that is only partially due to the presence of the ineffable Heather Masse. The latter album is as elegiac as one that Rudd has ever worked on. But scratch the surface and you will find not only that the same unbridled genius is behind the trombone, but that he has cleverly reversed his roles from improviser first to melodist first. In fact the line between the two is so blurred that the roles are interwoven as closely as in a fine silken fabric. Admittedly the album leans heavily towards the ballad-like and the art of the unravelling of the love song. However, more than anything else this is an emotionally charged album – just as the other one is – but here wildness has been substituted with studied grace, or to put it directly in the context of music – the wild dance has subsided into a sensory ballroom one. 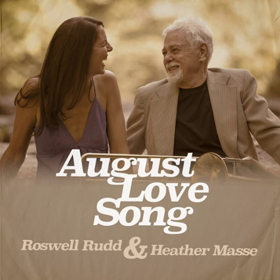 Roswell Rudd and Heather Masse parley with the familiarity of old friends, yet their playing always retains the gracious etiquette associated with the classic ballroom academy for which the music was seemingly intended. Rudd’s and Masse’s traversal of the songs share that subtle rhythmic flexibility. Yet Rudd’s sound is big-boned and generous, with a sense of depth and spaciousness that gives pieces – especially Mood Indigo and Con Alma – an almost orchestral scale. Masse, for her part delivers her vocals powerfully and lovingly, her glistening delicacy is a perfect foil to Rudd’s high-voltage trombone. Both are always sensitive to each other and each floats their exquisite long0limbed and exquisitely limpid lines exquisitely and effortlessly. Nothing is ever forced or exaggerated. All seems intuitively right and in perfect balance. Interestingly, in this performance too bassist Mark Helias and guitarist Rolf Sturm, who replaces the (more traditional) drummer, keep the pulse going in time and space, much like Dunn and Pandi do in the other recording in which Rudd is existentially present. And here too there is a forward drive, some deliberate gestures and a bright softness to Rudd’s sound to which he also brings a huge range of colour overall.

Roswell Hopkins Rudd, Jr. is an American jazz trombonist and composer. Although skilled in a variety of genres of jazz (including Dixieland, which he performed while in college) and other genres of music, he is known primarily for his work in the world of improvised jazz. Since 1962 Rudd has worked extensively with saxophonist Archie Shepp. Read more…